With an abundance of energy resources, Canada is well positioned to supply an energy-hungry world. Even with a cleaner energy mix, the world will need 6% more petroleum and 18% more natural gas by 2030. RBC Economics looked at three scenarios for oil and gas development over the next decade in their new report, "Energy Matters".

The role that carbon pricing and pipelines will or should play in our economy has become a matter of heated debate at the national level, and likely at many dinner tables too. We know that the choices on energy development we make today will have a significant impact on the country down the line.

With an abundance of energy resources, Canada is well positioned to supply an energy-hungry world, a new RBC Economics report shows. Even with a cleaner energy mix, the world will need 6% more petroleum and 18% more natural gas by 2030. Boosting our energy production would allow us to supply more of that need. With Canada’s own energy use set to flatline, increasing domestic oil and gas production would certainly pay off in growth terms—sustaining well-paying jobs and providing additional royalty revenues that governments could deploy for the good of Canadians. RBC Economics looked at three scenarios for oil and gas development over the next decade: a limited-growth option that would see greenhouse-gas emissions capped at existing levels; a base-case scenario which assumes production increases into the early part of the 2020s; and an ambitious growth scenario that assumes oil-sands development is more aggressive and lasts longer than under the base-case scenario. 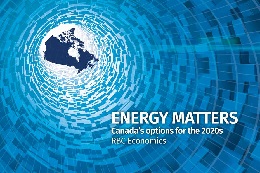 The most ambitious option would boost government coffers by delivering $44 billion in additional royalties. That’s money that could be used for education and healthcare. Or invested to re-orient the economy towards a cleaner future through the development of innovations like carbon capture and storage.

The environmental consequences, however, can’t be ignored. Canada’s oil-sands sector has cut per-barrel emissions by 35% since 1990, but it remains emissions-intensive relative to many other producers. Increasing oil and gas output, as assumed in RBC Economics’ most ambitious growth scenario, could add 42 megatonnes to the country’s annual greenhouse-gas emissions by 2030, and make it that harder to meet commitments under the Paris Agreement on climate change.

With so much at stake, the time is ripe for a national discussion on Canada’s energy future. A debate made with full knowledge of the costs and benefits, and one that generates more light than heat.

WHO's Peter Singer on booster shots, Vaccine Hunters and why trust begins (and ends) in communities