Here's some good news for weary would-be homebuyers in Canada: housing affordability improved — slightly — in the first quarter of 2019.

It was the second straight quarter of improvement, something that hasn’t happened since 2013, according to RBC Economics’ latest analysis of housing affordability. The costs associated with home ownership continue to be steep by historical standards, and downright unaffordable in a trio of cities: Vancouver, Toronto and Victoria. But they aren’t getting any higher, at least for now, suggesting Canadian policy makers’ efforts to cool certain markets have hit the mark.

For Canada as a whole, the costs associated with carrying a home purchased in the first quarter dipped to 51.4% of a household’s income, compared with 51.7% in the preceding quarter. The national measure masks some big differences depending on where you live. In Toronto, the bar to home ownership was about as high as ever, with home-ownership costs taking up a full two-thirds of household income. In Vancouver, despite a recent slide in prices and resales, the costs amounted to 82.0% of household income. That was down from more than 87% a year ago, but still meant home ownership is unrealistic for all but the wealthiest.

The home ownership dream is alive and well in other markets, including Halifax, Regina, Quebec City and St. John’s. Even in Montreal, where home resales have jumped 7% this year due to a strong economy, home-ownership costs stood at 44.3% of household income in the first quarter, below the national average.

There’s reason to be optimistic, too. Interest rates started going up in mid-2017, putting an added strain on homeowners already coping with high real estate prices. But they now appear to be on hold amid broader economic uncertainty. The job market is strong, meaning the outlook for household income is good. Affordability is likely to continue to improve modestly in the near term. 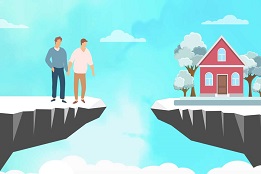