Immigration Nation: New Canadians are vital to an aging society

A wave of new Canadians is coming—and just in time. As our population gets older and birth rates decline we’ll face a range of challenges in supporting aging cohorts and sustaining growth. Increased immigration and better utilization of existing pools of talent can power the transition.

RBC Economics explains why in 9 charts:

1. Canada’s population growth is snapping back 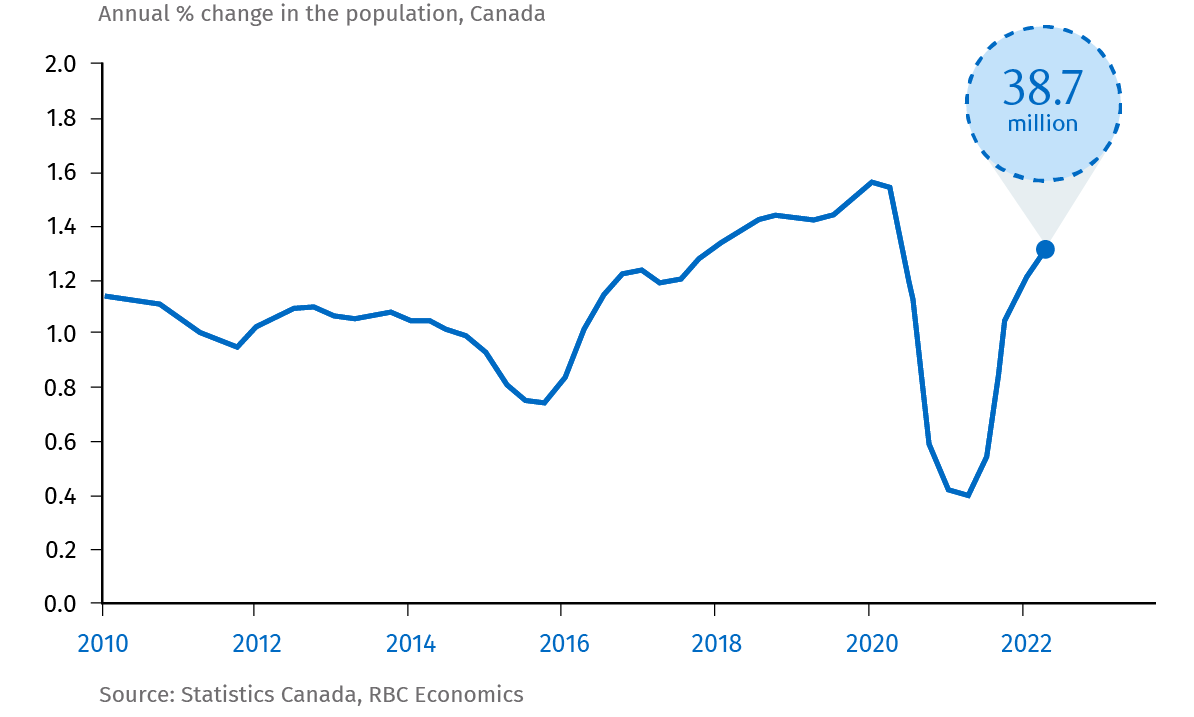 The flow of newcomers rebounded as the borders reopened and pandemic restrictions eased. The number of immigrants topped 400,000 by the end of 2021 and is still on the way up. Non-permanent residents (mainly foreign students and temporary workers) are also returning though their numbers have yet to reach pre-pandemic levels.

Virtually all of the renewed strength in population growth can be attributed to a single factor: immigration. And as low birth rates push Canada’s natural born population growth to zero by 2030, an even greater infusion of newcomers will be needed to grow the workforce.

Fortunately, immigration (on the rise since the 70s) is poised to hit the highest level ever thanks to new targets from Ottawa. These targets call for 1.3 million immigrants between 2022 and 2024.

3. Canada is in the middle of a global aging wave

The timing couldn’t be better. For centuries, Western economies were built on demographic expansion. But decades of declining birth rates and rising life expectancies have sent a grey wave washing through developed nations—including Canada. The country’s median age was 41.4 in 2017, up from 40.5 in 2015 and 26.1 in 1970. That number will continue to rise in the years ahead.

4. Get used to the labour crunch, it’s not going anywhere

For instance, the current tightness in labour markets—extraordinary by historical standards—could become a new normal for Canada as its population ages. Central banks are aggressively hiking rates to cool ultra-tight labour markets and ease inflation pressures. But more worker retirements will nevertheless push labour force participation rates structurally lower in the decade ahead.

That means labour shortages, already a significant issue pre-pandemic, will hit companies again after the next downturn. To counter this, we’ll need to convince older people to work longer, maintain or boost the flow of immigrants, and find ways to make our existing workforce more productive.

5. Immigrants and smaller households will add to housing demand 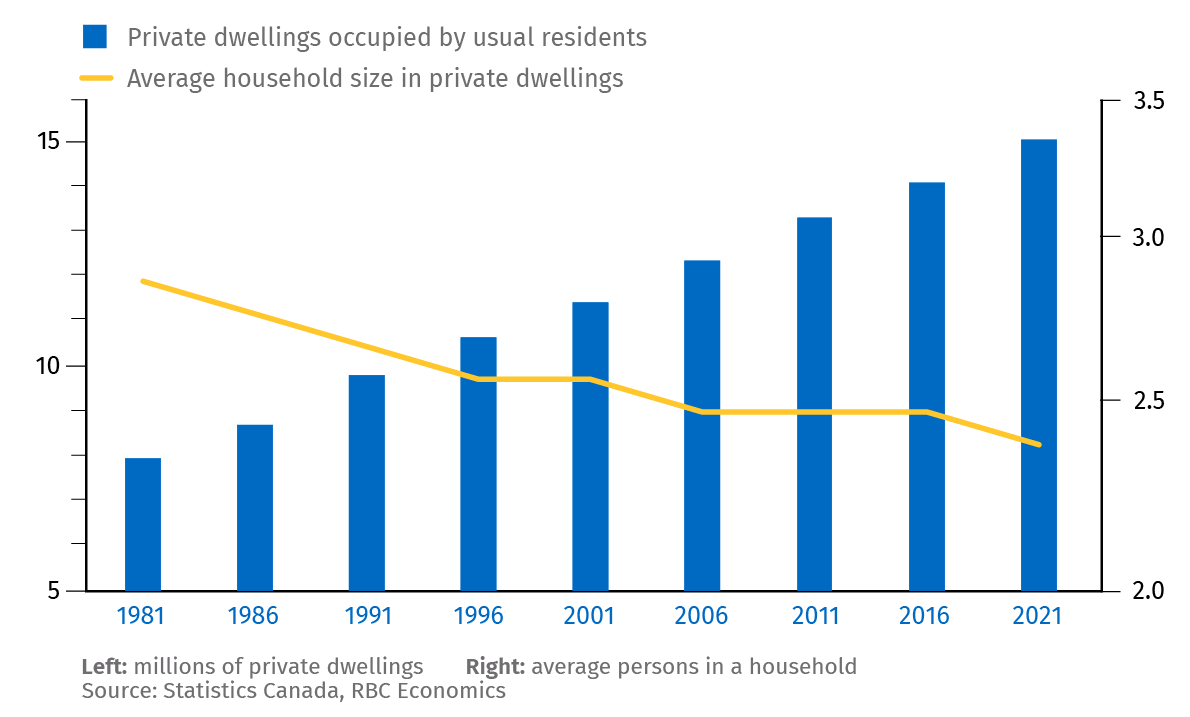 Think we’re short of houses now? That could get worse.

Canada’s housing stock will need to grow significantly to accommodate more immigrants. This is made more challenging by the fact that the average household will likely get smaller. It’s already shrinking: from 2.8 people in 1981, to 2.4 people today. Many Canadians prefer to live on their own. And many older Canadians aren’t moving out of their big homes once kids leave—a trend leading to “over-housing”. The older the population gets, the more housing units will be needed per person.

6. Aging will place a huge burden of health care on governments

An older population needs more health care. Per capita health care costs for seniors, already high $12,000 will rise above $16,000 by 2032 and more than double by 2050. To prepare, Canada will need to tackle the dual problems of funding and staffing, bringing a more robust pipeline of nurses, personal support workers and other healthcare professionals.

7. Canada will need to lean more on immigrants to fill labour gaps

Newcomers to Canada, already fuelling the workforce, will become critical to filling gaps in the labour market. Immigrants are often younger and have a longer working life ahead of them. As the post-pandemic labour squeeze tightens its grip on Canadian business, these newcomers are already among the few sources of relief. 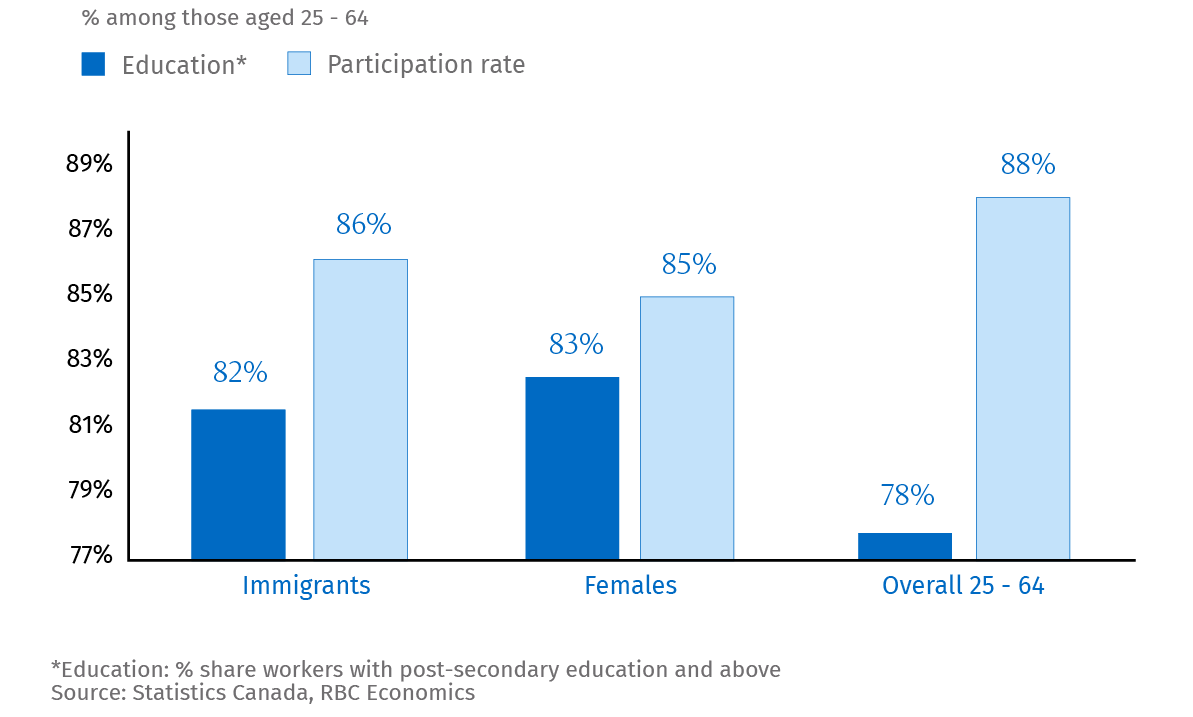 The share of working age women with post-secondary education has jumped from 43.7% in 1990 to almost 80% today. And targeted Canadian immigration policy means the share of educated immigrants is also on the rise. Immigrants are more likely to have post-secondary education than the Canadian-born population—and as many as 40% of all newcomers have received some form of education in Canada. Boosting the contributions of women and immigrants could reshape the Canadian workforce into something potentially more productive than it’s ever been.

The key is to more effectively tap into the productive potential and available skills of immigrants—and women. Though labour market outcomes have improved substantially for these groups in recent decades, there is still room for improvement, beginning with closing gaps in their labour force participation rates. Addressing long-standing equity concerns will also add to the nation’s long-run production potential.

9. Putting the strengths of new Canadians to work 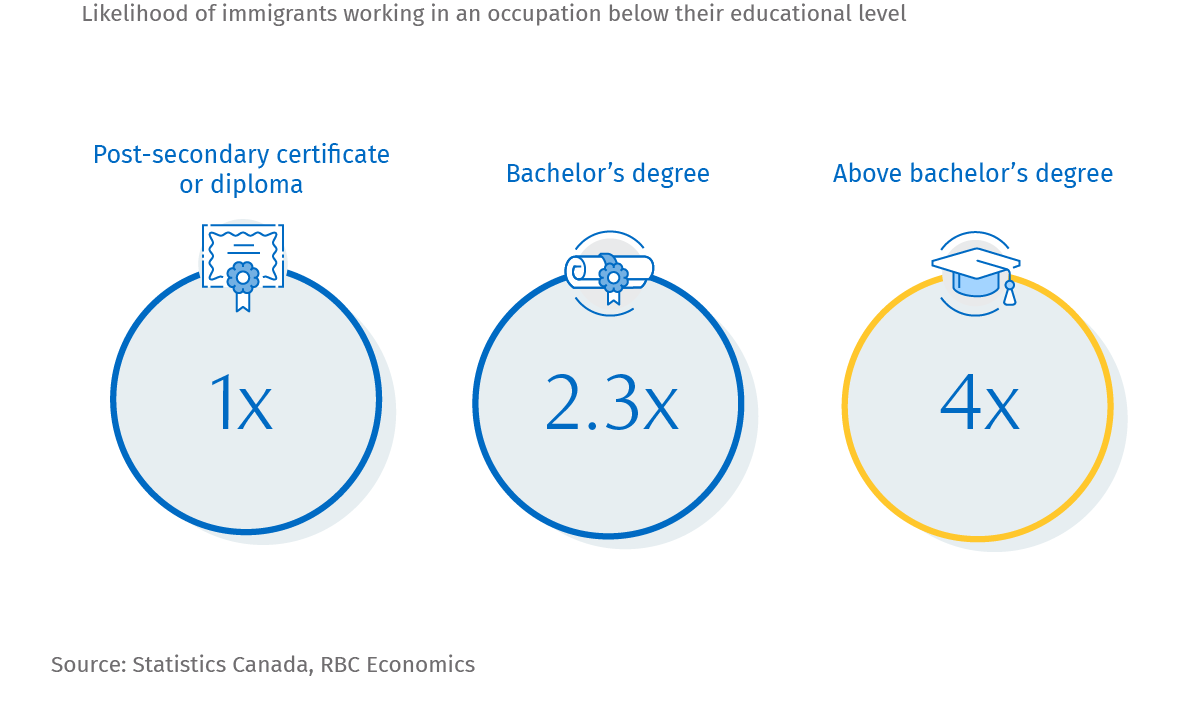 Despite their higher levels of education, immigrants are less likely to be in positions that match their qualifications. In fact, immigrants are twice as likely as their Canadian-born counterparts to report working in a job requiring fewer qualifications suggesting their potential is not being fully leveraged. Matching these skills to suitable positions could be a boon for Canada’s economy. But it will mean tackling a range of longstanding problems related to recognizing certifications, eliminating stigmas and developing integrated work learning programs.

Carrie Freestone is an economist at RBC. She is a member of the macroeconomic and regional analysis group and contributes to the macro and provincial forecasts where she monitors key emerging macro trends.