A Regional Renaissance: More Canadians drawn to live on the Atlantic Coast during pandemic

COVID-19 super-charged the migration of Canadians to Atlantic Canada. In the first and second quarters, net interprovincial migration to the region was higher than in 2019 and 2020 combined. The surge in the second quarter alone was the largest since 1961, when data collection began. Atlantic Canada is one of two coastal regions enjoying an influx of arrivals this year, alongside British Columbia.

Lower COVID spread in the Maritimes probably amplified the region’s appeal. But relatively affordable housing was likely an even bigger draw, especially as home prices skyrocketed in already-expensive parts of the country and more Canadians were able to work remotely. Saint John, New Brunswick, and St. John’s Newfoundland remain the most affordable housing markets we track. Even in Halifax, the average home price is 60% below that of Toronto. With housing affordability worsening in major urban markets in Central Canada, this may mark the beginning of a trend: young talent moving east for an improved quality of life.

More than half (55%) of Canadians who migrated to Atlantic Canada in Q2 settled in Nova Scotia, with Halifax the fastest growing city (CMA) in the country so far in 2021 in terms of population. Another 25% moved to New Brunswick, while Newfoundland—a province that typically posts a negative net interprovincial migration balance—has seen arrivals from other provinces outweigh departures for two quarters in a row. PEI welcomed the greatest number of Canadians from other provinces since the early-1960s, and posted the strongest population growth of all provinces this year.

Youth aged 18 to 24 and young adults aged 25 to 44 have accounted for close to half (44%) of interprovincial migration to Atlantic Canada. These provinces have long seen outflows of young adults (often well-educated and highly-skilled). But this was not the case during the pandemic. Another 17% of net interprovincial migration was children and teens, signaling families are moving east as well.

It remains to be seen whether the surge of newcomers will endure. If it does, this would be great news for a region that has struggled to attract and retain people for decades. A permanent influx of migrants would revitalize Atlantic Canada’s economy and potentially help address labour shortages. PEI, for example, posted a 10% vacancy rate in the tech sector in the second quarter and over half of new arrivals to the province were between the ages of 20 and 30 this year. New arrivals on the coast bode well for population growth too, especially once immigration resumes. Additional new residents could drive stronger consumer spending and will also result in higher government revenues, fuelling this Atlantic revitalization. 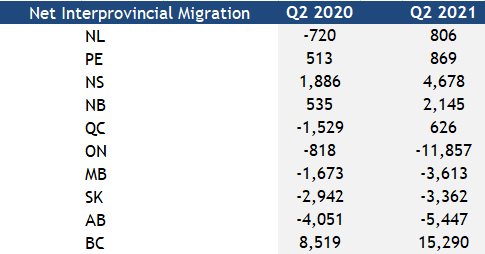