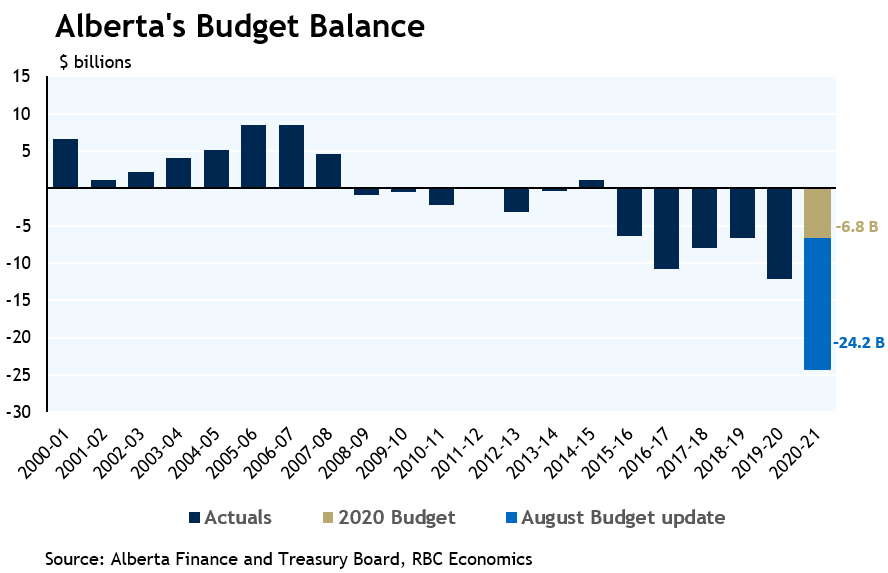 The new deficit figure is more than triple the projection included in the February 27th budget. All Canadian provinces are facing record deficits this year, so Alberta is not alone in substantially revising their pre-COVID budget. However, Alberta’s reliance on highly volatile non-renewable resource revenues has exacerbated the province’s fiscal situation. Its deficit, at 7.7% of GDP, is the highest among the provinces.

The increased deficit is largely accounted for by lower expected revenues (down by nearly a quarter, or $11.5 billion, to $38.4 billion) with income tax and non-renewable resource revenues plunging 25% and 76%, respectively. The province’s updated assumption for West Texas Intermediate (US$36 per barrel) in 2020-21 is 38% lower than the February budget assumption (US$58).

In addition to falling revenues, provincial expenses have been upwardly revised by $5.3 billion (up 9.3%) to $62.6 billion. Alberta’s COVID-19/Recovery Plan will cost the province $3 billion this fiscal year, and the divestment of crude-by-rail contracts is set to cost $1.3 billion. The capital plan has been boosted by $1.4 billion to $8.4 billion, which largely reflects accelerated investment from future years. The province’s tax-payer supported debt projection is expected to increase by $25.4 billion (a 34% increase from 2020 levels) to $99.6 billion on March 31st, 2021. Net debt is expected to represent 30% of GDP at the end of March 2021.

The Alberta government forecasts real GDP to fall 8.8% in 2020 and grow 4.6% in 2021. Nominal GDP is expected to plummet 13.9% in 2020 before rebounding by 6.3% in 2021. Alberta is making a strong plea for reform of the federal government fiscal stabilization program, including the removal of the $60 per resident cap embedded in the program. It makes sense for the province to request more favourable terms to make up part of the hefty revenue losses it’s suffering from these extremely challenging circumstances. Over the coming years, though, the provincial would also do well to actively diversify its provincial revenue sources, especially reducing dependence on non-renewable resources—the price of which it has no control over.