B.C. Posts Record Deficit in the Wake of COVID-19

In February, the B.C. NDP government tabled the 2020 budget projecting a surplus of $227 million in FY 20/21. On July 14th, the province released a fiscal update forecasting a $12.5 billion deficit. This is the largest deficit on record dating back to the 1970s. British Columbia has fared relatively well during the pandemic, keeping the viral caseload comparatively low, and was one of the first provinces to enter Phase 3. Despite this, the province projects revenues will fall by $6.3 billion and has allotted $6.3 billion to COVID-19 response measures including the Pandemic Contingencies response measure ($5 billion) as well as other business relief and tax measures. In the face of the burgeoning deficit, net debt-to-GDP is expected to rise by seven percentage points to 22%, which is high for the western province but still comparatively low on a national scale. Similar to other provinces in this uncertain climate, B.C. opted not to include a multi-year outlook in this update.

B.C.’s budget update includes a 6.8% hit to real GDP in 2020, which is significantly weaker than our call of -4.2% for 2020. We have B.C. performing significantly better than the national average (-6.0% in 2020), given BC has the lowest per-capita incidence of the virus of the four most populous provinces and was able to re-open sooner. In BC, 235,100 jobs were lost between February and June, a decline of 9.2% which was in line with the national average of 9.0%. We expect BC’s economy recovery in 2021 to be stronger than the province’s projected gain of 3.1% and look for real GDP to increase by 3.9%. 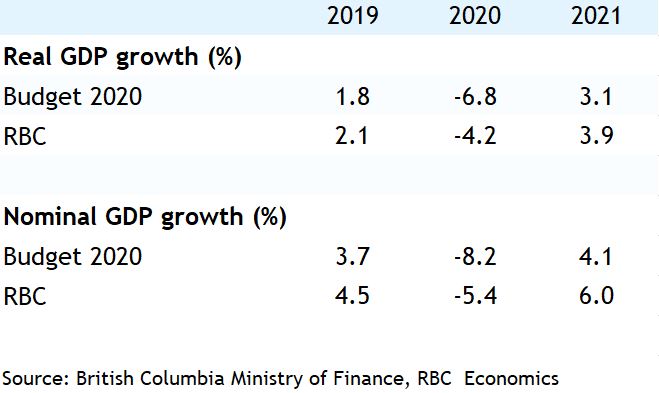 The government penciled in a hit to annual revenues from the pandemic of $6.3 billion for FY20/21, $4.2 billion of which is expected to result from lost tax revenues. The pandemic is expected to cost the province just under $2 billion in combined foregone personal and corporate income taxes. Provincial sales tax is the single most costly item, with revenues expected to be down $1.3 billion. Retail sales activity dropped 23.6% from February to April. Crown corporation revenues are expected to fall by $882 million this year as casinos have been shuttered and lower demand from restaurants and pubs dampen Liquor Distribution Branch sales. Property transfer tax revenues are projected to fall by $465 million after housing sales dropped 45.4% from February to May and home prices dipped by 4% over the same time period.

Mounting Expenses due to Crisis Mitigation

The provincial government expects to spend $6.3 billion on programs related to the pandemic. B.C. has set aside a $5.0 billion “Pandemic Contingencies allocation,” which was announced on March 23rd as part of the B.C. COVID-19 Action Plan. Expenditures include the BC Emergency Benefit, which is a $1,000 tax-free benefit available to residents whose employment income has been impacted by COVID-19. The Contingencies Allocation also includes support for those receiving income assistance including those with disabilities and seniors, as well as rent relief for eligible families, and pandemic pay for front-line workers. The province has earmarked $1.5 billion in the Contingencies Allocation for economic recovery. In addition to the $5 billion allocation, B.C. is also incurring a $500 million cost associated with the one-time Climate Action tax credit enhancement as well as $762 million in other business relief and tax measures. After absorbing $176 million in debt-servicing costs and netting out the expected surplus, this leaves a projected deficit of $12.5 billion.

In February, the taxpayer-supported debt level was expected to come in at $49.2 billion by the end of FY 20/21. In the midst of the pandemic, the debt level has increased by $12.7 billion this year and is penciled in at $61.9 billion for the fiscal year. The taxpayer-supported debt-to-GDP level has risen by 6.5 percentage points to 22% of GDP. Even with this increase, BC still has one of the lowest debt burdens in Canada aside from Alberta and Saskatchewan. Saskatchewan’s updated debt-to-GDP levels are slightly below B.C.’s and Alberta has yet to release an update.

In the February budget, B.C. announced a $32.6 billion allocation of capital over the three year fiscal plan, with taxpayer-supported capital spending at its highest level, $22.9 billion (over three years). The province’s infrastructure projects, which include schools, post-secondary, housing, transit, transportation networks and hospitals have been minimally impacted by the province, according to the update. The majority of construction delays have taken place at the sub-provincial level. The province is expected to release details of changes to capital spending (if any) in September once the full impact has been assessed.