One of the key themes in the past six weeks has been a consistent increase in the size and scope of both monetary and fiscal support to address the COVID-19 crisis. The Bank of Canada kept that up today with several new measures, including expanding its three-week-old asset purchase program to include provincial and corporate bonds.

Governor Poloz noted that fiscal and monetary policy support will “put a floor under the economy and lay the foundation for the subsequent recovery,” but also acknowledged that in the near-term policymakers “can do little more than cushion the blow.” In estimating the size of that blow, the BoC opted against issuing its standard quarterly forecasts, instead providing an expected range for economic activity over the first half of the year. The BoC estimates Q1 GDP could be 1-3% lower (StatCan data this morning suggesting a 2.6% non-annualized hit) and Q2 GDP 15-30% lower than the final quarter of 2019. It didn’t put numbers around the recovery, but sketched out both optimistic (containment measures relaxed soon and limited structural damage to the economy) and pessimistic (containment measures lasting longer and having a more sustained impact on both supply and demand) scenarios. Inflation is expected to fall to zero in the current quarter with a rebound in 2021 depending on the timing and strength of the economic recovery. Governor Poloz judged that the risk of sustained deflation in Canada is low.

As for policy measures, previously-announced purchases of Government of Canada bonds (at least $5bn per week, or $260bn if the program continues for 12 months) will continue to make up the bulk of the BoC’s QE program, with new provincial bond purchases capped at $50bn and investment-grade corporate bonds capped at $10bn (both programs getting started in early May and lasting 12 months). The BoC has already dipped its toe in shorter-term provincial and corporate debt markets but the programs announced today are larger in size and reach further out the curve (up to 10 years for provincial and 5 years for corporate debt). Along with GoC purchases (which Governor Poloz emphasized can be increased at any time if warranted), these programs are meant to help absorb some of the increase in bond supply that will stem from significant government and corporate borrowing, and to ensure these markets continue to function well. Once again, Governor Poloz distinguished that market functioning goal from the more traditional QE aim of pushing longer-term interest rates lower.

Other measures announced today include an increase in Treasury Bill purchases (40% of new issuance vs. a previous max of 25%) and an extension of term repo funding to 24 months (to address “relatively high longer-term funding costs” for banks). These moves come on top of 150 basis points of rate cuts in March that brought the overnight rate to its “effective lower bound” and a number of other liquidity programs that the BoC says have helped reduce but not eliminate market stress.

Today’s rate announcement was the last before Governor Poloz’s term ends on June 2, though with unscheduled announcements having been the norm in recent weeks, this might not be the last we see of him. Whether it’s Governor Poloz or his replacement, the BoC says it has the tools and capacity to further increase monetary policy support as required. With asset purchases now expanded to include provincial and corporate bonds, an increase in the size of these programs, or more likely the pace of GoC purchases, would be a logical next step if needed. One tool the BoC doesn’t sound keen to use is negative interest rates. And while Governor Poloz has been vocal in his concerns about negative rates, the fact that other central banks are also shying away from that tool suggests Poloz’s successor is unlikely to suddenly embrace it. 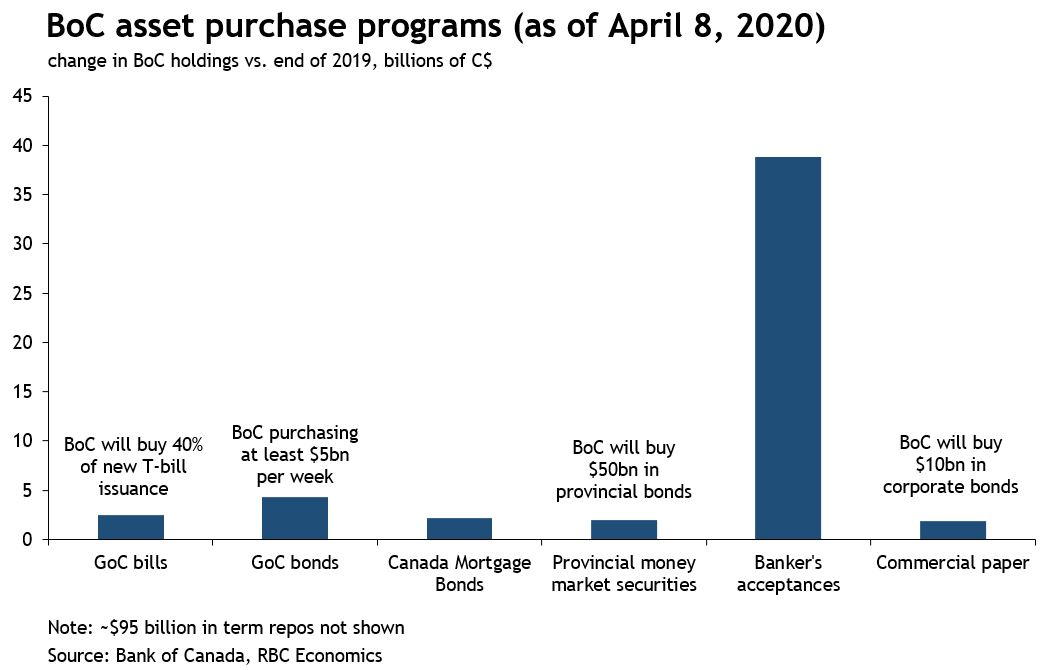