The Bank of Canada lowered its overnight rate to 0.25% this morning and launched a new program of weekly government bond purchases that represents the bank’s first foray into quantitative easing. QE is hardly a new tool for central banks—it was used extensively by the Fed, ECB, BoJ and BoE following the global financial crisis. Canada was able to get by without such extraordinary policy measures, but unfortunately the scale of the coronavirus crisis has now forced the BoC to join the QE club, as the RBA and RBNZ did in recent weeks.

The BoC will purchase a minimum of $5 billion of Government of Canada (GoC) securities every week. Purchases will be adjusted as needed and the bank will continue the program “until the economic recovery is well underway.” The purchases will expand the bank’s balance sheet, a hallmark of QE (if purchases continue at the minimum rate for half a year the size of the bank’s balance sheet would more than double). Governor Poloz didn’t argue against calling the program QE, though he made a distinction between the bank’s current goal of ensuring smooth functioning in financial markets and the more traditional monetary policy objectives of QE like lowering longer-term interest rates.

In fact, Governor Poloz noted several times that the BoC is focused more on restoring financial market functionality rather than traditional monetary policy stimulus, and that fiscal policies are better able to support the economy at this stage. Toward that market functioning goal, the second program announced today (commercial paper purchases) adds to others put in place in recent weeks (purchases of Canada mortgage bonds, banker’s acceptances, and provincial money market securities; and other liquidity providing measures) to ease stress across key funding markets and ensure lower risk free rates are effectively transmitted to a range of borrowers. As the GoC market is “foundational” to those other markets, QE will also help in that regard.

Today’s 50 basis point rate cut returns the overnight rate to its financial crisis low of 0.25%, which Governor Poloz referred to as the “effective lower bound.” When asked about the potential for a negative policy rate, Poloz argued against taking this step. While he noted that theoretically the overnight rate could be lowered to -0.50%, other central banks’ experiences with negative policy rates suggest negative effects on the financial system “are significant.” Adding stress to the financial system would go against the bank’s current goal of ensuring its smooth functioning, and in any case lower rates will have little impact on the economy amid current shutdowns. Summing up, Poloz said the bank is “not contemplating” negative rates and the financial system “will work better at this level.”

That begs the question—what will be the BoC’s next move if more stimulus is needed? Given the scalability of the programs announced thus far, we think the next step would be to increase the pace of asset purchases, and potentially broaden their scope. That could mean buying more GoC securities or ramping up CMB purchases to more QE-like levels. We also wouldn’t rule out more substantial purchases of provincial and corporate securities to address wider spreads in those markets, if needed. The policies announced today look like an appropriate response at this stage, but in this fast-changing crisis it’s impossible to rule out the need to do more. 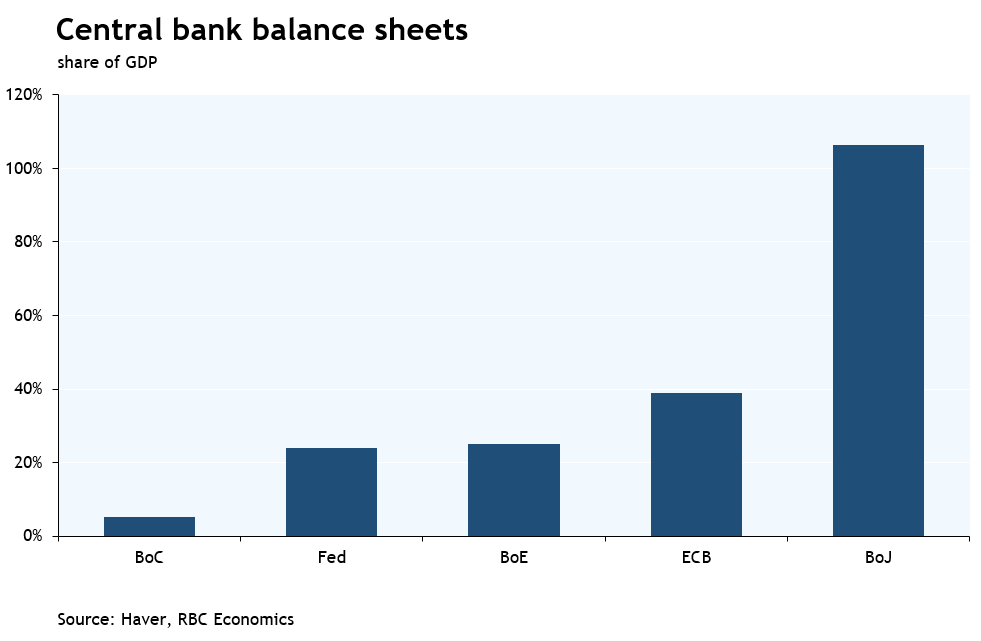