Stronger revenues support the fiscal picture over the forecast horizon

There is more upside to the revenue picture in the current fiscal year 2022-23 – the private sector forecast on which budgetary projections are based was from early February, before the Russian invasion and with a $80 USD per barrel WTI price for 2022. Our current forecast has higher real and nominal GDP growth. However, our 2023 outlook is lower on both fronts relative to the Budget 2022 forecast, at the very least limiting revenue surprises beyond the current year.

New spending not as strong as it could have been

Gross new spending is lower than we expected it could be – in early March, the PBO estimated that outstanding platform commitments alone could add a further $49 billion through 2025-26, before commitments related to the Liberal/NDP pact, defence, and Emissions Reduction Plan. Gross spending through 2027 is $56 billion.

The divergence reflects a collection of big-ticket measures not yet implemented – there is nothing booked for national pharmacare (despite a commitment to pass legislation in 2023), nor for at least $16 billion in platform commitments, by our count. And new defense spending of less than $2 billion a year is much lower relative to the $16 billion Canada would need to get to the NATO 2% target. A few new additions get sizeable funding, including growth oriented policy, climate, Indigenous reconciliation, and a higher profile for the Canada Health Transfer.

Revenue measures are expected to bring in about $25 billion over the horizon, with only a couple new measures outside the government’s election platform and international commitments. There were also no forthcoming taxation measures announced. The only sizeable platform revenue measure not yet implemented is a minimum tax for top earners, which the government says it is examining and will release in the 2022 fall update.

A large slice of new revenues come from special taxes on banks and insurers, both on a one time basis and ongoing. We continue to think that this narrow targeting of revenue measures sends the wrong signal on Canada’s business investment climate to highly mobile international capital. A broad and more fundamental review of tax policy is preferred to improve tax efficiency, increase government revenues, and attract foreign capital. 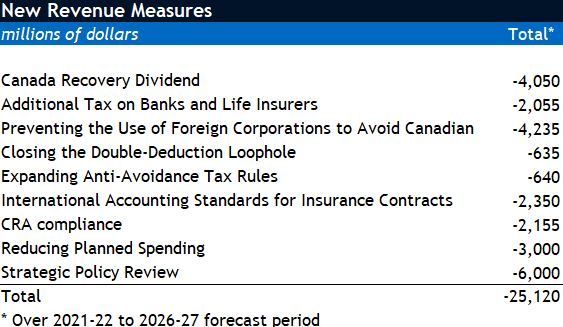 Deficit and debt-to-GDP on a downward trajectory

With higher revenues and lower-than-expected spending, Budget 2022 posts an improved budgetary balance to the tune of $31 billion in 2021 ($113 billion deficit) with slight improvements going forward. Combined with higher nominal GDP, the Government’s renewed fiscal anchor, debt-to-GDP ratio, is expected to decline more rapidly than in EFU 2021.

To account for uncertainty around the global fallout from Russia’s invasion of Ukraine, the budget provides two scenarios – one with heightened inflationary and growth impacts that deteriorate the budgetary balance overall during the forecast period, and a moderate one leading to marginal improvements. Even in the heightened scenario, debt-to GDP is expected to fall further than in the EFU 2021. But, it does not appear to be a full-scale domestic economic shock that would call upon fiscal buffers. As we wrote in our preview, the government needs to be prepared in case this is a short economic cycle.

Finance Minister Chrystia Freeland announced 29 new housing-related measures (by our count) worth $10 billion over five years. Nearly all were taken from last fall’s Liberals election platform. They run nearly the full spectrum from supply-boosting initiatives to speculation deterrence to added support for buyers.

Individually, many of these measures aren’t likely to move the needle much or will do so only gradually over time. But together, they send a loud message that the government is eager to do what it can to steer the market onto a more sustainable—and affordable—path.

The biggest test for the housing market will start with next week’s widely anticipated Bank of Canada hike to its policy interest rate by a hefty 50 basis points—and in our opinion a further 100 basis by year-end. Any additional measures by provinces and municipalities, who have most housing supply levers, could also be impactful. Within this context, Minister Freeland’s housing budget could have a real impact on the market, even if it will be the junior partner.

While many of the investments in Budget 2022 were released in last week’s Emissions Reduction plan (for more, read here) to much fanfare, the Budget still funds an additional $5 billion in climate-related commitments. It made good on an investment tax credit for carbon capture ($2.6 billion), with a higher rate for direct air capture than run-of-the-mill CCUS. Overall, we think the Government is aiming for about $18 billion in investment by 2030, which may be a hard sell even with a ~50% credit (about 20% of the carbon capture costs come from elements that would only attract a 37.5% ITC). There was little detail on how government would solve regulatory issues, which was a greater focus for innovation-themed spending, and will remain a key challenge for meeting the government’s climate targets.

A 30% ITC for clean technology will help fund uptake of net-zero technology, battery storage and clean hydrogen, as will some funding to improve small modular nuclear reactors, with details to come in the fall. Conservation and adaptation also got major commitments, with a $2 billion investment over 9 years to further protect Canada’s oceans, funding to reduce plastic pollution, and protect freshwater and old growth forests, and funding to improve Canada’s wildfire response.

Overall, innovation and co-investment were big themes in the Budget. A new arms-length Canada Growth Fund, similar to the Canada Infrastructure Bank, will receive $15 billion. It’s aimed at providing concessional financing, equity and other contracts to attract private sector funding for projects aimed at cutting emissions, developing low-carbon industry, and restructuring critical supply chains. This could be one way for government to guarantee carbon pricing to heavy emitters. More innovation funding will eventually flow from a Canadian Innovation and Investment Agency, which will partner with industry to invest in R&D, with details due in the fall.

Intellectual property was also top of mind in Ottawa, with funding to protect Canada’s IP from foreign threats, committing to a future rethink of SR&ED, and consideration of lower taxes on patent-related corporate income. Government will help researchers commercialize IP, and a slower phase out of the Small Business Deduction will reduce the disincentive to scale up (at a cost of $165 million a year). Superclusters will receive a fresh batch of funding totaling $750 million to expand their national presence and contribute to climate transition and solving supply chain challenges, but will have to compete for their slice of the pie.

The Government remains laser-focused on securing the supply of Critical Minerals, with $1.7 billion in funding for infrastructure investments, an investment tax credit for exploration, and funding for the Strategic Innovation fund to wade further into the space. Some regulatory changes to the impact assessment for these projects will come in the fall statement. Nearly $600 million was allocated to projects that alleviate supply chain issues, including easing the movement of goods across the country.

Major supports for new Canadians, less so for skills development

On the heels of ambitious new immigration targets announced in February, the government delivered nearly $4 billion (nearly $800 million ongoing) in commitments to support new immigrants and asylum seekers. The efforts provided little detail past which departments would get extra funding, but indicated support for digitizing claims and expanding capacity to process them.

The budget has some funding to support labour shortages, with tax cuts to encourage labour mobility among tradespeople and funding to recognize foreign healthcare credentials. But overall, the scale of these programs pales in comparison to Canada’s job vacancy challenge. Notably absent was focus on skills development, with no funding announced despite a proposed edit to the EI act to encourage retraining before unemployment. We view this as an oversight in light of major ongoing skills shifts due to digitization, automation, and the drive towards a greener economy.

Budget 2022 includes $5.8 billion in own-source health care spending (excluding transfers), the vast majority being allocated to the new federal dental care plan, at $5.3 billion over the next five years. The annual allocation will grow to reach $1.7 billion annually. The budget includes a commitment to establish universal national pharmacare, but has not included allocations to this expenditure over the fiscal horizon.

The Canada Health transfer is set to increase 4.8% in FY 2022-23, above the required annual 3% increase. This corresponds to $45.2 billion in CHT transfers to the provinces and territories in 2022-23 and $12 billion more over 5 years than expected pre-pandemic. Provinces will welcome the additional allocation, but this increase is likely insufficient to meet sub-national demand, and the premiers’ requests, as provincial healthcare costs will balloon in the years ahead.

More commitment to defence, but for how long?

Despite $8.2 billion in new defence spending and support for Ukraine, Canada is still not close to NATO’s encouraged target defense allocation of 2% of GDP, which would require about ten times the magnitude of new annual spending announced in the budget ($16 billion more annually). And it’s not clear if new spending has an ongoing component.

This budget includes a sizeable $10.6 billion allocation to move forward on reconciliation and reparation, building on the EFU 2021 announcement $40 billion settlement for Indigenous child welfare. Over one-third of new spending is devoted to services and support for First Nations children, alongside a noteworthy $4 billion investment over 7 years to close Indigenous housing gaps.

Additionally, included in the $10.6 billion is funding for community infrastructure on reserves including water infrastructure, the development of a national benefit-sharing resource with National Resources Canada, and funding to co-develop Indigenous-led services for mental health and wellness.

Cynthia helps shape the narratives and research agenda around the RBC Economics and Thought Leadership team’s forward-looking economic and policy analysis. She joined the team in 2020.