Those are some of the calls we heard from Indigenous leaders in the tech space, when we brought a roundtable together to discuss Building Bandwidth, RBC’s recent report on preparing Indigenous youth for a digital future. The report makes the case for harnessing the power of two growing forces in Canada: the rapidly advancing economy, and the emergence of Indigenous Canadians as the fastest growing youth demographic in the country.

Building Bandwidth was always intended as a conversation starter. Here are five ideas for moving forward, based on insights from Indigenous techies across Canada.

Everyone agrees: technology needs to play a bigger role in K-12 education.

Blaire Gould, who promotes technology in schools as the executive director of Mi’kmaw Kina’matnewey in Nova Scotia, talked about the value of youth learning alongside others in their community: making friends, building connections. This practice, “cohort in community,” produces better results than pursing school and training elsewhere. Too often, Indigenous youth feel compelled to leave their communities, and find themselves missing their support net and overwhelmed by culture shock.

Similarly, an outside organization coming into the community for a one-off event or weekly workshop doesn’t cut it either, according to Jace Meyer, the executive director of the Indigenous Innovation Institute. That tends to create an “us and them” divide, leaving the impression that the skills came into the community but then left again.

2. Roll out the role models

When Indigenous students don’t see themselves reflected in the tech programs or companies that interest them, it makes them far less likely to take a chance on applying.

Tara Rush, who collaborates with Indigenous communities in her work at Google in Waterloo, talked about actively going to schools and colleges to talk to Indigenous students—particularly in the U.S., where a lot of their hiring is focused—to make it clear you can be an Indigenous face in a Google t-shirt.

The work doesn’t stop once a young Indigenous person kicks off a career in tech. The employer needs to surround them with a good support system, and help them to reach their full potential.

The shift to remote work might make this more difficult. Any employer serious about hiring and retaining Indigenous talent also needs to be serious about advocating for Internet access—the lack of connectivity is arguably the biggest barrier to success. Furthermore, in the absence of face-to-face conversations, anti-racism training will become even more important, so managers and colleagues remain aware of the danger of micro-aggressions and emotional labour on employees who are BIPOC (Black, Indigenous and People of Colour).

3. Build confidence in the future

Mitch Gegwetch, who leads NPower’s Indigenous tech workforce development from Toronto, talked about how, for many Indigenous youth, completing high school or even getting a GED doesn’t seem worth the investment.

There was widespread agreement on this critical point: they need to know where education could lead.

Dallas Flett-Wapash, who grew up on Keeseekoose First Nation in Saskatchewan, recalled how he loved watching YouTube and playing videogames—but didn’t know there was a way into the space for him. It wasn’t until grade 12, when a teacher introduced him to software like Photoshop and video editing, that he saw a possible career in technology mapped out for him. Now he’s a videogame developer, and he leads online workshops as a youth mentor.

Getting the word out early is something Jordan Baptiste takes seriously in his work developing training and education opportunities for Indigenous youth in Saskatoon. They get big smiles on their faces when they learn about careers in tech, he said. Growing up, many assume that the jobs that await them are limited to the skilled trades.

For Nova Scotia’s Gould, the demands of directing education across the province’s Mi’kmaq communities—including long hours and travel—are balanced out by the intrinsic value of working for her community. That’s what keeps her going.

Indigenous youth need to see tech as a means to better social and cultural outcomes, not just career advancement. The tech world tends to emphasis individualism, and capitalism more generally, and that doesn’t necessarily resonate.

“We don’t thrive in white capitalism,” said Shopify’s Tracy Ridler, who works with Indigenous entrepreneurs across Canada. “We thrive in collectivism.”

Children are natural innovators, and technology comes naturally to many of them. Nurturing these twin skills from an early age could pay off in a big way, instilling confidence in young people to try new ways of doing things.

Flett-Wapash, the videogame developer, is passionate about his work because not much of the content he consumed growing up was created from an Indigenous perspective. Now he can imagine a world where creative learners such as himself are able to stay within their communities, and create things the community wants—from educational videos to the software to advance policy needs.

Taking this a step further, the roundtable participants talked about the value of truly taking ownership of technology—such as building platforms and infrastructure—in order to see technology as an Indigenous space, where they too belong. 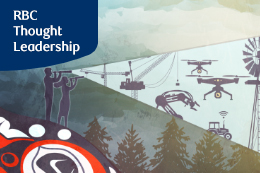 Sonya Bell joined RBC’s Thought Leadership and Economics team as a Senior Manager, Content Delivery in 2018, coming from Queen’s Park where she was a senior writer to the former Premier of Ontario. Previously, Sonya worked in journalism as a producer at CBC and as a federal political reporter for iPolitics. Between Parliament Hill and Queen’s Park, she spent two seasons as a comedy writer on This Hour Has 22 Minutes.