Proof Point: Canada's economy is headed for a recession

In Canada, economic pressures are closing in

When you’re at the top of the hill the only way to go is down. Canada’s economic growth has fired on all cylinders following pandemic shutdowns. But a historic labour squeeze, soaring food and energy prices and rising interest rates are now closing in. Those pressures will likely push the economy into a moderate contraction in 2023.

Canadians continue to fuel a recovery in the travel and hospitality sectors. And higher global commodity prices have boosted the mining sector. But businesses are struggling to find the workers they need to expand production. There were nearly 70% more job openings in June than before the pandemic—and those hunting for staff were forced to compete for almost 9% fewer unemployed workers. Meantime, soaring prices are cutting into Canadians’ purchasing power at the pump and the grocery store. 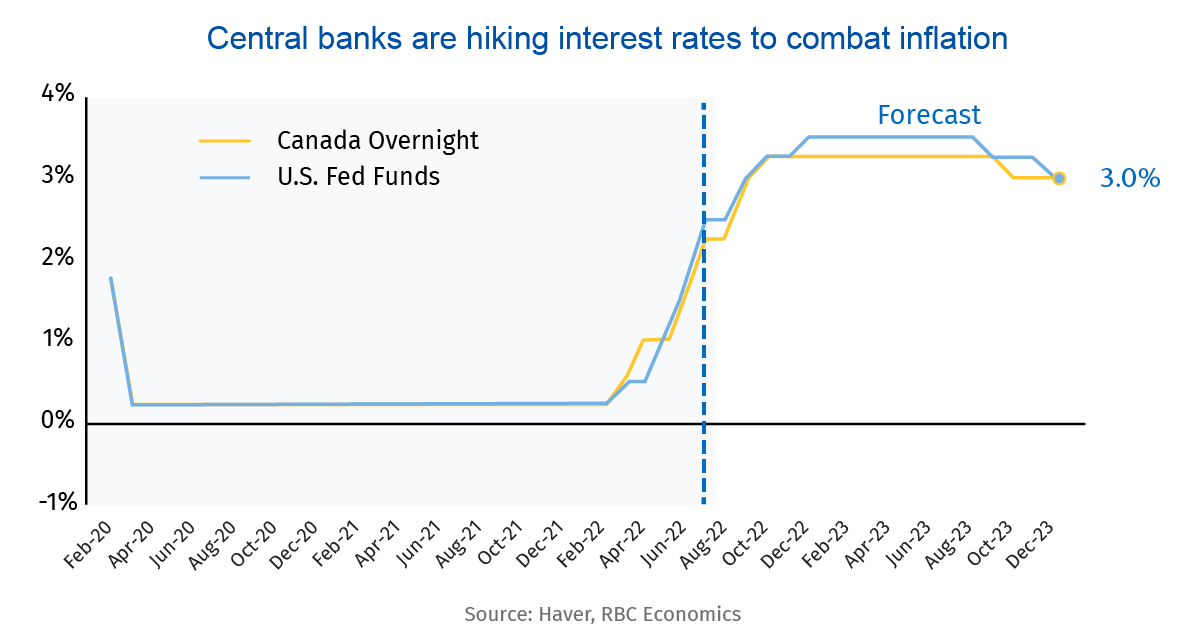 This recession won’t be as severe as prior downturns

Both in Canada and abroad, central banks are aggressively hiking rates to slow household demand and fight inflation. In Canada, much of the price pressure is coming from beyond our borders, as energy and agricultural prices surge on supply chain snarls stemming partly from the Ukraine war.

Strong domestic demand for housing and services has intensified these pressures and the labour crunch is driving wages higher. The Canadian unemployment rate is now almost a full percentage point below RBC’s assumption of its longer-run neutral (non-inflationary) level. As the economic contraction plays out next year, that rate will likely rise another 1 ½ percentage points to 6.6%.

These job losses will come at a time when Canadians are already grappling with higher prices and debt servicing costs (factors that have hit lower income households the hardest). Still, by historical standards, we expect the slowdown to be modest. Indeed, a 6.6% unemployment rate would still be more than 2 percentage points below the 8.7% peak in the 2008/09 recession. 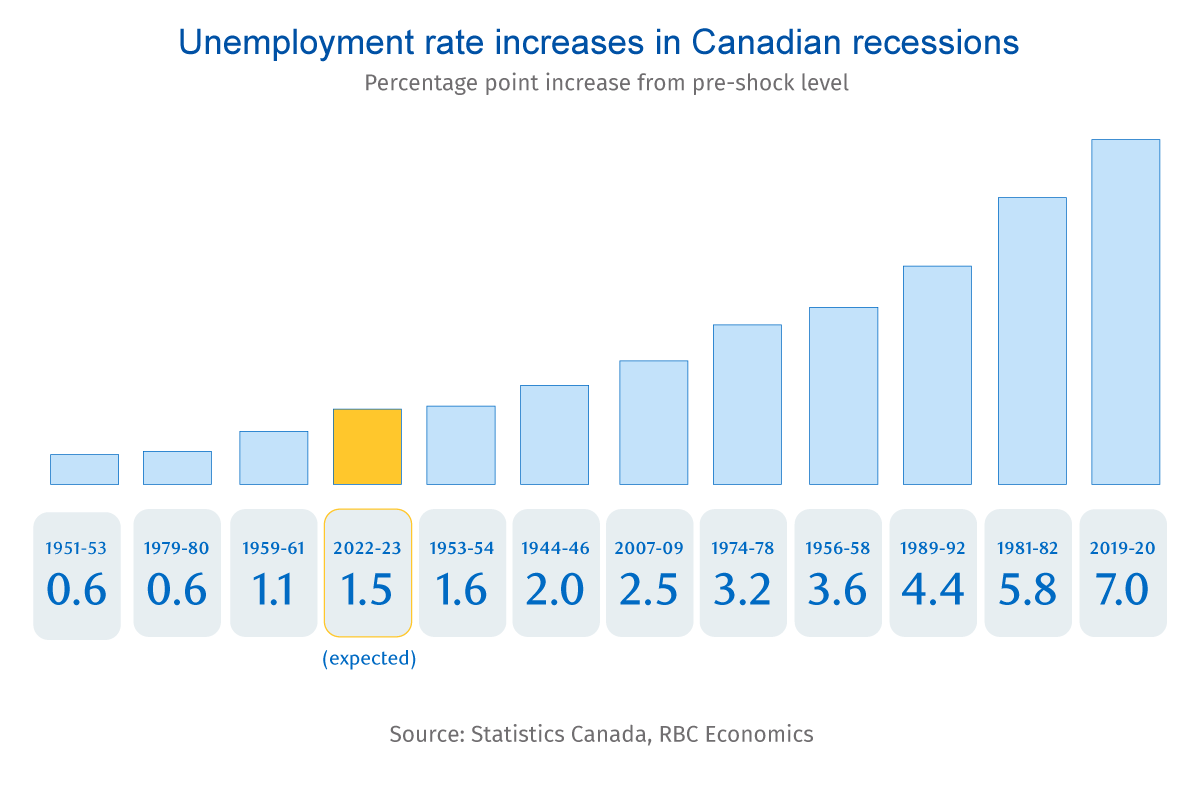 Higher rates are key to reining in inflation expectations

Though higher rates will technically push Canada toward a contraction, the Bank of Canada now has little choice but to act. Inflation has been too strong for too long and is starting to creep into longer-run business and consumer expectations. Higher inflation expectations can become self-fulfilling, making businesses more likely to pass on cost increases and consumers more willing to pay for them (and demand higher wages). A scenario in which Canadians believe inflation will run well past the bank’s target range of 1 to 3% could upend almost three decades of exceptionally effective inflation targeting policy. It could also require much larger and more damaging interest rate hikes to re-anchor prices.

Higher 5-year inflation expectations drove the U.S. Fed’s decision to hike rates by 75 basis points in June. With the BoC confronting a similar increase, a hike at least as large is likely in Canada on July 13th. And neither bank is done. The U.S. Fed and the BoC are expected to lift rates to 3.5% and 3.25% respectively, by the end of 2022. That’s high enough to significantly restrict growth, particularly in Canada, where household debt is very high.

Slowing growth abroad will spill over into Canada

Even without rate hikes, labour shortages in Canada and abroad are preventing expansion. The U.S. economy contracted in Q1 and though we’re tracking a small increase in Q2, it wouldn’t take a major forecast miss to have a second quarter of negative growth. We expect the U.S. unemployment rate to rise to 4% by year’s end and climb to almost 5% in 2023. Meantime, emerging markets will struggle with higher food and energy prices, elevated borrowing costs and a strong U.S. dollar. And pandemic disruptions continue to curb growth in China.

These slowdowns in external demand will drag on Canadian growth.

The boom in household spending will flag later this year

Canadian households have socked away over $300 billion in savings since the end of 2019. That’s boosting spending—and adding more inflation pressure.

But the lion’s share of savings remain with higher income households, leaving lower income groups more vulnerable to rising rates and prices. Housing markets have softened dramatically, with prices swinging from record highs over the winter to declines in the spring. We expect house prices to fall 10% in the year ahead, subtracting over $800 billion from household net worth.

That would only partially retrace the $2.4 trillion surge in real estate equity since 2019. Still, it will leave Canadians feeling “less wealthy” prompting them to spend less in the housing market and elsewhere. 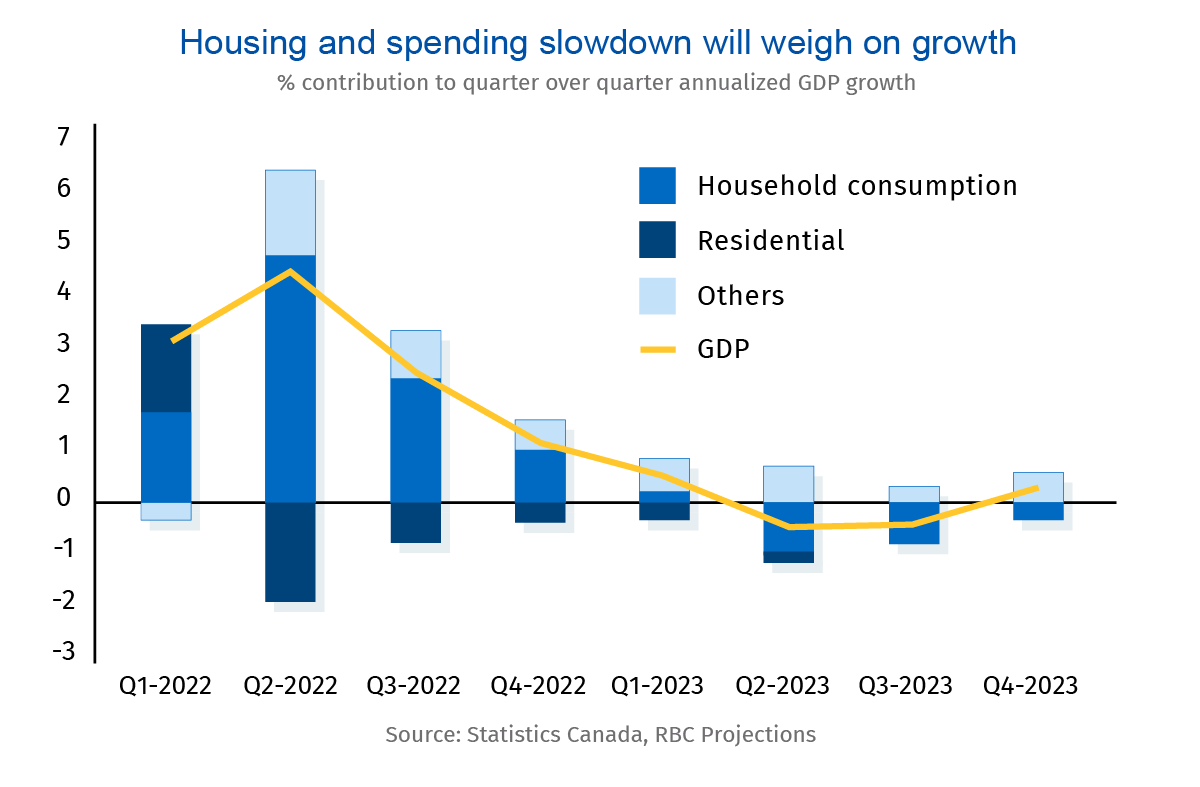 Rate hikes will reverse but not until inflation cools

Global inflation pressures may soon peak. Shipping costs have declined. And exceptionally strong demand for goods—which has sparked supply chain challenges and higher input costs—is moderating as consumers in Canada and abroad shift spending to services that weren’t available during pandemic lockdowns. Much of the surge in wheat prices following Russia’s invasion of Ukraine has reversed.

Prices are still rising too fast and inflation won’t slow sustainably until demand falls. But once that happens, central banks will ease interest rates again. Meantime, a slowdown both in Canada and abroad will help temper inflation. A 6.6% unemployment rate in Canada next year wouldn’t be far above long-run ‘full-employment’ levels. We don’t think it’ll take long to unwind that weakness in 2024 and beyond.

View the RBC Economics forecasts for Canada and the U.S.

Buying a home has never been so unaffordable in Canada