The second wave of virus spread and the re-imposition of containment measures put the brakes on Canadian retail sales in December. Statistics Canada’s preliminary estimate of retail activity showed a decline of 2.6% in the all-important December shopping month. And with lockdowns intensifying in parts of the country, we expect sales will dip again in January.

RBC’s credit/debit card spending data point to sales falling about 5% in December and January in data available to-date, a much less acute drop than in the spring when retail sales plunged over 30% over March and April.

In part that’s because restrictions have not been as widespread in the second wave of shutdowns. In-person shopping has been shuttered to varying degrees, and in regions where non-essential retailers have been fully closed, curb-side pickup has generally remained an option. And restrictions ramped up as the Christmas shopping season progressed – typically with a few days’ notice which allowed for some stockpiling ahead of closures. Big box stores that sell groceries have been largely left open, although with restrictions in some regions to selling only ‘essential’ retail products. So some of the resilience reflects a shift in spending to these larger retailers. That’s what happened in the spring of 2020 when sales at ‘general merchandise stores’ surged to over 15% of total retail sales from under 12% before the nation-wide lockdown.

Retailers better positioned to deal with shutdowns in second wave

But stores that historically have focused more on in-person shopping have also significantly increased capacity to sell on-line and utilize alternative delivery methods like curb-side pickup. And customers have become more comfortable shopping remotely. E-commerce sales thrived during the pandemic, more than doubling the year-ago comparable in April before calming to a still-elevated level for the remainder of 2020. It also accounted for 7.4% of total sales in November – the highest share since May – and that growth likely accelerated in to December as more stores closed to in-person shopping.

And it was not only online retailers boosting non-store sales. As we noted in our Navigating 2021 report, more than half of that growth in online sales came from retailers with a traditional brick & mortar store presence. Indeed, even in the dark days of the spring shutdown, spending appeared to strengthen significantly through the month of April – that is before restrictions on retail stores were formally relaxed – as both businesses and customers became more comfortable with transacting online. Those changes are still in place, and have likely contributed to a more resilient retail sector through the second wave of closures.

Household purchasing power has been supported by government transfers

Labour markets remain exceptionally weak with over 600K fewer people employed in December than pre-shock levels in February last year. But government support programs have also provided a significantly larger offset to lost wages than usual. Indeed, household disposable incomes increased substantially through the third quarter of 2020 as government transfers outweighed lost wages. Disposable incomes likely rose again despite employment declining in December. And that’s because most job losses were coming among those who were making less than the minimum $500/week payable under the newly expanded EI and CRB programs. We expect those income supports to keep household incomes elevated until labour markets can more sustainably recover once vaccine distribution allows for more sustainable easing in containment measures. 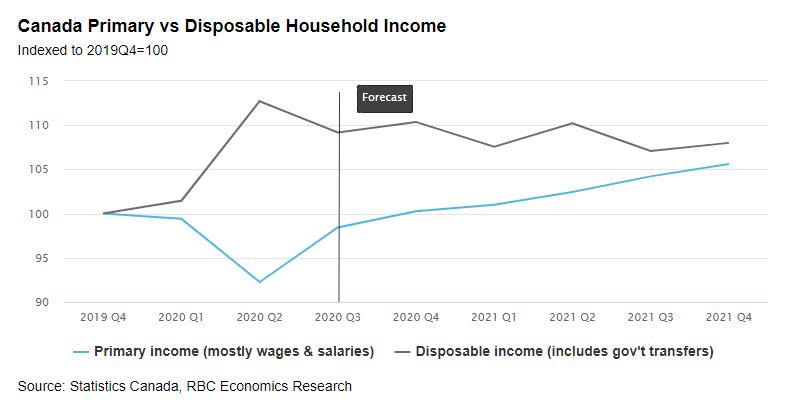