On September 30th, Finance Minister Siobhan Coady tabled her first budget in her new role. Minister Coady recited the provincial anthem to instill determination and resolve before presenting the blow to the province’s fiscal balance, which the minister likened to a “blinding storm.” Newfoundland and Labrador’s deficit is now projected to come in at $1.8 billion—the second-highest on record and representing a jaw-dropping 7.4% of GDP (surpassed only by Alberta among the provinces). Nonetheless, this was $300 million below the projected deficit in July’s fiscal update.

The provincial government also revised its surplus for 2019-20 upwards, as the Atlantic Accord (agreement reached with the Federal government in April 2019), delivered $2.5 billion to the province last year. Accounting requirements necessitate that the province counts the revenue in the year it is received, leading to a $1.1 billion surplus in FY 19/20. Newfoundland and Labrador did not publish a multi-year outlook, due to ongoing uncertainty surrounding the trajectory of the virus.

Revenues down 25% in the wake of COVID-19, lower oil prices

Newfoundland and Labrador’s revenues are set to shrink by a quarter this year, to $7.1 billion, largely due to deferred bills, lower tax revenues, and plummeting offshore royalties from the struggling oil and gas sector. Tax revenues are expected to fall 10.5% this fiscal year, with Personal Income Tax and Sales Tax down 4.7%. Offshore royalties are projected to plunge by nearly half due to rock-bottom oil prices. That said, the revenue forecast has been upgraded modestly since the July update. Oil prices recovered partially. The province has also received additional federal COVID-19 funding. In late July, Ottawa committed to providing $146 million to Newfoundland and Labrador as part of the Federal Safe Restart Agreement. Moreover, the federal government has recently earmarked $320 million to support workers in Newfoundland and Labrador’s oil and gas sector. The provincial government does not plan on making changes to tax rates, but an increase in the federal carbon tax will result in an 8.7% increase in carbon tax revenues. The price of gasoline is set to increase by 0.21 cents/litre on October 1st.

The provincial expense forecast remains largely unchanged since the July fiscal update, sitting just below $9 billion. This budget included several new developments, notably, a $100 million allocation to expenditures related to COVID-19 for personal protective equipment, testing, and mobilization efforts to support the distribution of an immunization once available. In addition to health spending, Newfoundland and Labrador has committed to initiating $25/day childcare starting in 2021 to improve women’s participation in the labour force. Also noted in the budget is $609 million earmarked for infrastructure including roads, health care facilities, and schools. The province’s allocation to the Newfoundland and Labrador Housing Corporation will increase by 7% this year, with a large portion of the increase allocated to rent subsidies. Lastly, the Province’s Accelerated Exploration Initiative will incentivize oil and gas companies to drill more wells, by allowing for the re-investment of forfeited exploration bid deposits.

Net debt-to-GDP, highest of all provinces

This year, net debt is penciled in at $16.4 billion dollars, up from $14.4 billion in FY 19/20. The debt-to-GDP ratio is expected to reach 56% this year, the highest provincial net-to-GDP level of all provinces. Newfoundland and Labrador has not experienced debt levels of this magnitude in 15 years. One-third of the province’s total debt comes from the Muskrat Falls hydroelectric project, which is currently facing further delays due to COVID-19.

Newfoundland and Labrador will need to borrow $3 billion this year in order to cover programs and services. The province has already borrowed $2 billion to date.

Newfoundland and Labrador has been hit with a double whammy of COVID-19 and plummeting oil prices. Weak capital project spending will also contribute to the province’s economic drag this year. Our forecast has Newfoundland and Labrador experiencing the deepest contraction in real GDP of all provinces. Nevertheless, the province addresses the crisis with determination and resolve. Newfoundland has coordinated investment in the oil and gas sector through the Accelerated Exploration Initiative to spur investment and create jobs alongside the receipt of federal support, and has invested in affordable childcare to enhance women’s participation outcomes. In 2021, growth is expected to rebound 3.9%, but it will take years before GDP returns to pre-COVID levels. Newfoundland and Labrador has a long road ahead, but the words of Minister Coady exhibit Newfoundlanders’ pride and resolve, “We will not fold when things get difficult.” 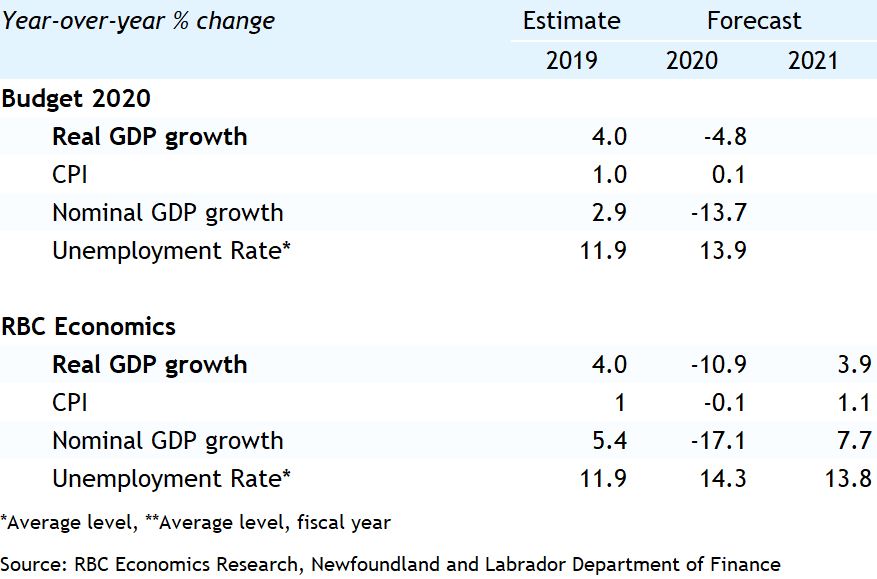