Global Pandemic to Cause Record Deficit

Saskatchewan is largely a Canadian success story in the way it handled the COVID-19 pandemic. The province has a very low case count and transmission rate, and was one of the first to enter Phase 2 of recovery. Despite these successes, Saskatchewan has not been immune to job losses, and has been at the mercy of rock-bottom oil prices, weak fertilizer prices (and lower potash royalties), and soft demand for agricultural products. With businesses shuttered and the majority of the province working from home as global economic activity contracts, key revenue sources like oil royalties, resource surcharge revenue, provincial sales tax, and utility payments have been hit hard. At the same time, the province has borne unforeseen COVID-related expenditures including aid for municipalities. Saskatchewan has been one of the first province to release an updated fiscal picture in the midst of a rapid deterioration of provincial budget balances and it is marked with a record-breaking deficit of $2.4 billion. Nevertheless, Saskatchewan is weathering the storm from a position of relative strength, with one of the lowest net debt-to-GDP ratios among the provinces. At the centre of the province’s fiscal plan is a $2 billion fiscal stimulus package to fund infrastructure projects and create new job opportunities. The province has opted not to include a multi-year outlook due to uncertainty surrounding the pace and duration of the economic recovery process ahead.

Saskatchewan is projecting a $2.4 billion deficit in FY 20/21, 60% higher than that of FY 15/16, the last time oil prices collapsed. FY 20/21 includes a $200 million health and public safety contingency fund to cushion against a potential second wave of the virus. The government revised its FY 19/20 estimates, now showing a $319 million deficit (arising from a weaker final quarter).

Revenues to plummet despite new measures

Budget 2020 announces several new revenue measures. First, the province will re-introduce the annual indexation of personal income tax to the national rate of inflation for the fiscal year 2021. Saskatchewan has also introduced a new incentive encouraging investment in the chemical fertilizer sector, and plans to extend the existing Manufacturing and Processing Exporter tax incentive. The province has indicated it will be imposing additional measures to crack down on PST collection from non-resident businesses. This year, revenues are expected to fall $1.2 billion (8.3%) to $13.6 billion. The greatest source of projected revenue declines is non-renewable resource revenue, which is expected to fall $753 million (43%) on the assumption that WTI prices will average $30 per barrel, or 83% lower in FY 20/21 relative to the fiscal year prior. Net income from government business enterprises is projected to decline $127 million (14.8%) as casinos close and shuttered businesses result in lower utility revenues. Fee revenues weigh on other-own source revenues, which will fall by 9.6%, while federal government transfers are set to increase by $197 million (7.6%) to $2.8 billion, $212 million of which is COVID-related relief. Taxation revenues, typically a more stable form of revenue, are projected to decline by $350 million (4.6%). These declines reflect lower expected gas tax and provincial sales revenues.

Expenditures are expected to grow by $868 million (5.7%), largely due to COVID-related expenditures including $164 million in new measures earmarked for municipalities in the form of funding for infrastructure projects (through the Municipal Economic Enhancement Program) and transportation infrastructure, $56 million in temporary wage supplements for essential workers, $50 million for small businesses (Saskatchewan Small Business Emergency Payment), and $12.6 million in commercial rent assistance.

At the centre of Saskatchewan’s economic recovery plan is a $2 billion fiscal stimulus package in the form of targeted funding for infrastructure investments, which will create employment opportunities in the province as it emerges from the crisis. The package is a part of a broader commitment within the Capital Plan to spend $7.5 billion over the next 2 years and $30 billion in infrastructure in the coming decade. The province plans on investing $1.1 billion (14% of total capita spending) over the following 2 years on highways, $435 million on education capital, and $350 million on health care facilities. Just under half of the two-year capital allocation will be distributed to crowns including SaskPower and SaskEnergy. 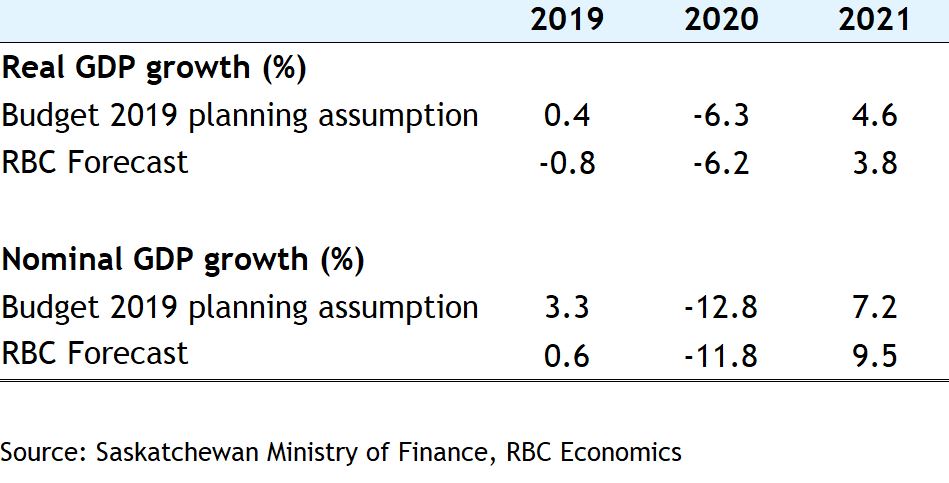 This fiscal year, public debt will increase by $3.0 billion, just under two-thirds of which ($1.9 billion) will cover COVID-19 costs or lost revenues, and the remaining $1.1 billion will fund infrastructure, as previously determined before the viral outbreak. A low interest rate environment will benefit the province, whose financing charges are 1% for short-term borrowing and 2.5% for long-term borrowing.