Helping to shield Quebecers from inflation

The Quebec government used the latest update on its fiscal situation as another opportunity to help Quebecers cope the rise in the cost of living. A $5.1-billion increase in budget room this year—stemming from a $6.4-billion upward revision to its revenues—was entirely allocated (and then some) to new spending initiatives ($5.4 billion). And almost all of it is directed to an “anti-inflation shield”. One-time grants of up to $600 to Quebecers earning less than $100,000 a year (costing $3.5 billion), new financial support for seniors ($1.5 billion) and limiting government rate indexing to 3% ($32 million) will use up $5.1 billion of the increased budget room in 2022-2023. Other measures to tackle housing affordability issues ($244 million) and strengthen security in Montreal ($53 million) will round up the new spending.

The “shield” extends well beyond the current fiscal year. Enhanced assistance to seniors will add a further $6.5 billion over the next four years, and the indexation limit another $1.6 billion. Including spending boosts on other items, Quebec’s fall fiscal update offers almost $14 billion in new measures over the entire five-year fiscal plan relative to the spring budget.

Despite it all, the size of the deficit revised lower

Yet the government expects a modest improvement in its budget balance. It cut its deficit projection to $5.2 billion (after deposits into the Generations Fund) in 2022-2023 from the $6.5 billion expected in the spring. It also downwardly revised the next two years’ forecasted shortfalls.

The strong performance of the Quebec economy—especially on a nominal basis—over the past year not only helped boost government revenues substantially but also puts various fiscal metrics in better light. Among them is the provincial debt which is now expected to track lower as a share of GDP than was anticipated in the spring budget. This is positive news of course. It further reinforces the years-long trend toward a more manageable and sustainable level of indebtedness. Still, the fiscal update rightly acknowledges the looming downturn in the economy that is poised to make for a more challenging landscape in the period ahead. With nominal economic growth expected to slow considerably and bringing in smaller revenue increases, the government will have less room to further shield Quebecers without undermining its fiscal position. The window of pleasant surprise is likely about the close. 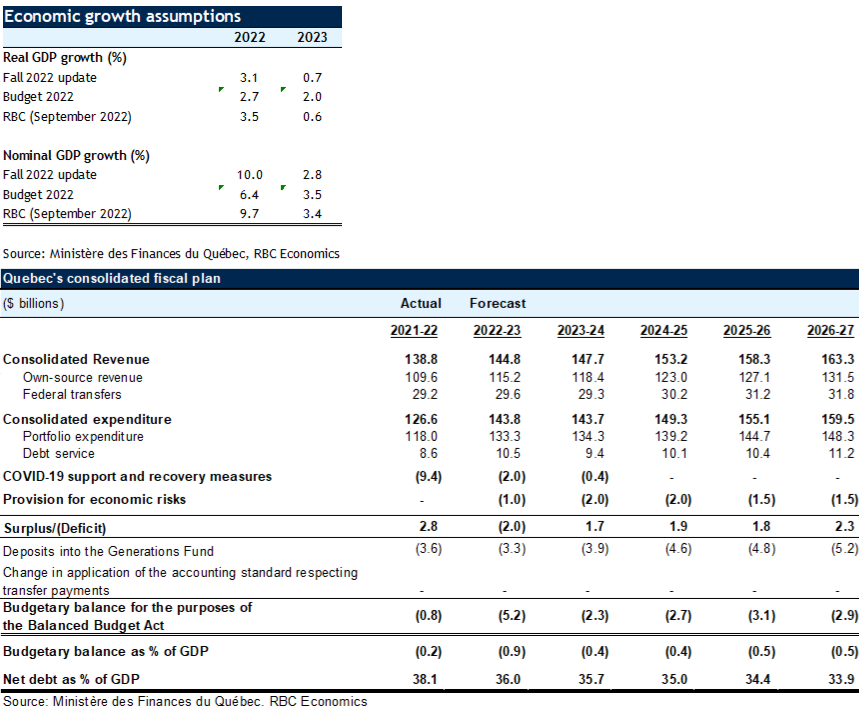