Atlantic Canada became a magnet for new residents during the pandemic. After a 40 year period when 5,000 residents (on net) left the region annually, migration began to tick up in 2016. But it was COVID-19 that threw fuel on the fire as lower case counts and relatively affordable housing added to Atlantic Canada’s appeal. In 2021, over 22,000 more Canadians arrived in the region from other provinces than left it. And net interprovincial migration was 40% higher than from 2016 to 2020 combined.

This flow of immigration will likely fuel population growth as interprovincial migration slows with the removal of pandemic restrictions. If Ottawa’s aggressive new immigration targets are met, we could reasonably expect an additional 62,000 new international migrants to arrive in Atlantic Canada within the next three years, boosting the size of the local population by 4%. 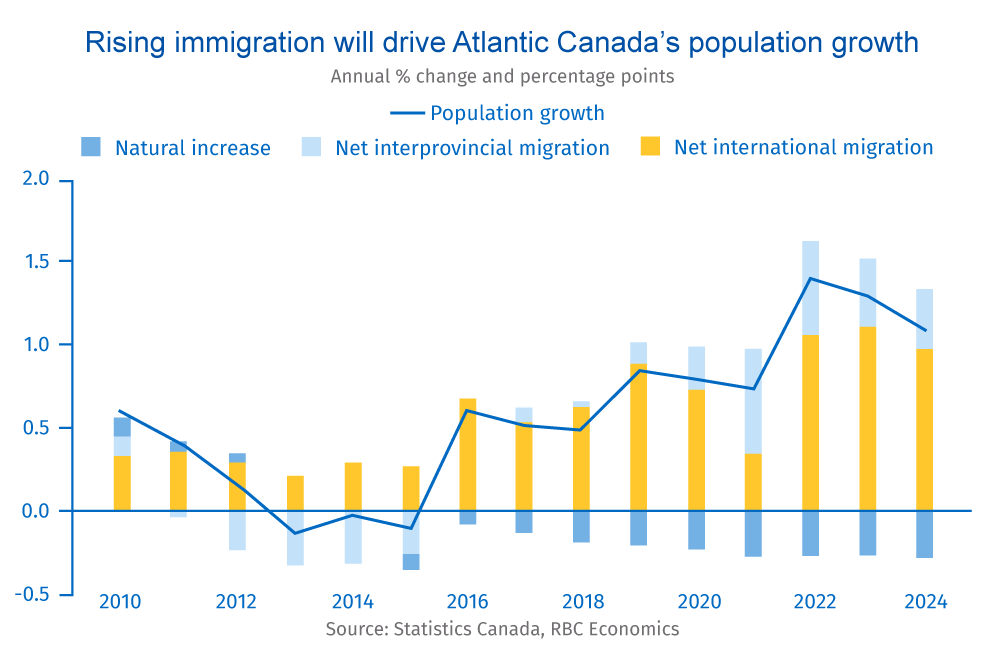 Population aging is spurring a structural shift in the Canadian labour market that will see low unemployment rates become the new normal. And no region is aging faster than Atlantic Canada. With a lower crude birth rate, the share of the region’s population aged 65 or older is currently above 22%, compared to 19% nationally. By 2030, 27% of Atlantic Canada’s population will be 65 years of age or older compared to less than 22% everywhere else.

Record migration could help slow this trend. Atlantic Canada’s immigrants are younger, with most coming from Asia and West Africa. And the vast majority—83%—of new arrivals to the region from abroad are economic immigrants compared to 63% nationally. The Atlantic Immigration Program will continue to recruit skilled workers and international graduates in the years ahead.

The rush of new migrants in recent years has already blown past previous projections based on high growth scenarios. And moving forward, it would be unsurprising to see higher levels of immigration boost the population of Atlantic Canada by more than 10% by 2030. Higher population growth will help fill vacant jobs and invigorate regional industries.

With every economic opportunity, however, comes new challenges. One example is deteriorating housing affordability. Throughout the pandemic, Halifax was one of Canada’s fastest growing CMAs (behind only Kelowna and Oshawa). In Halifax, our housing affordability measure deteriorated by the most on record between 2020 and 2021 as prices rose 27%.

But the upside of ongoing migration will outweigh the challenges

Nevertheless, Atlantic Canada will remain comparatively affordable. The average home price in 2021 was still 46% lower in Halifax than Ontario, and it was 69% lower in Moncton. And lower density means more room to build. Since lower priced regions are less sensitive to higher interest rates, Atlantic Canada will remain a more affordable option for Canadians, even as an era of rock bottom rates comes to an end.

Naturally, higher density will necessitate additional infrastructure investment, but Halifax commuters will still enjoy comparatively short commutes and an enhanced quality of life. Higher wage growth, consumer spending, and government revenues will be a net positive for the region alongside broader diversity.

Carrie Freestone Carrie Freestone is an economist at RBC. She provides labour market analysis, and is a member of the regional analysis group, contributing to the provincial macro outlook.