It's been a month since our last 'quarterly' provincial outlook update, and we have both good and bad news to report.

The bad news first: COVID-19’s brutal toll on provincial economies is worse than we previously anticipated. We now project contractions ranging from -4.8% to -11.2% in 2020—by far the deepest recessions we’ve ever seen. The good news is the recovery phase is upon us. All provincial governments have initiated plans to reopen parts of their economy. The process will be generally slow at first but should allow activity to meaningfully rebound over the second half of this year that will continue into 2021 (barring any setbacks at containing the pandemic’s spread). April 2020 will likely be the cyclical low point.

We’re receiving growing evidence the economic shock of COVID-19 was uneven across the country—largely paralleling the relative severity of the pandemic. Quebec has been the most negatively affected with 820,000 people (-19%) losing their job over two months and the unemployment rate soaring to a record-high 17% in April. The Quebec government in March imposed the widest-ranging lockdown measures in the country to control the highest incidences of COVID-19 cases in Canada. Lockdowns covered the entire construction and real estate sectors (though the government has since eased those restrictions). Saskatchewan, Manitoba, New Brunswick and Prince Edward Island suffered comparatively smaller employment losses. Health situations have been more stable in these provinces.

Time to reopen… phase by phase

It increasingly appears extraordinary social distancing measures introduced since mid-March have successfully averted worst case scenarios for the pandemic. Provincial governments have now begun to roll out reopening plans. These plans share many similarities in their phased approach as well as the broad categories of activities and businesses that will be first allowed to resume. For most provinces, these include non-urgent surgeries, and services from health professionals (dentists, optometrists, physiotherapists, etc.). However, some go further. Plans in Manitoba and Alberta allow retail stores, restaurants and personal service providers to reopen under certain conditions. Ontario is now permitting curbside pick-up at non-essential retail stores, in-store purchases at hardware stores and garden centers. Quebec is embarking on an ambitious strategy to re-open primary schools and daycare centres despite being one of the worst hit provinces by the coronavirus.

We expect all provinces to start recovering as governments reopen parts of the economy. The road ahead is highly uncertain. Many factors are still unknown—not least of which is the pandemic’s trajectory. Nonetheless, we have sketched out a path for each provincial economy based on governments’ current reopening plans, and our views on the prospects of various industries. We see Manitoba and BC being furthest along their recovery paths by year-end. Newfoundland and Labrador, and Alberta will lag behind all provinces. Decades-low oil prices will pummel their energy sector and send shockwaves to other parts of their economies. PEI, Saskatchewan and Quebec also will end 2020 with much ground lost still to make up for. The maintenance of some form of social distancing measures, permanent closure of businesses, weakened balance sheets and bruised confidence will restrain the economic rebound’s pace. The journey toward full recovery will be long for all provinces—easily stretching into 2022 or beyond in some cases. 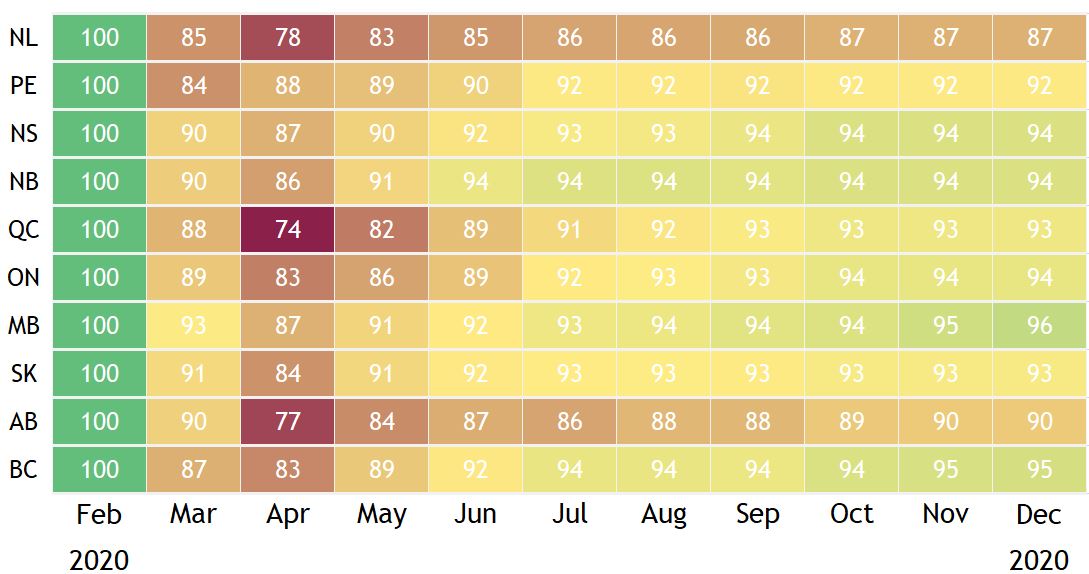 Newfoundland and Labrador: We believe COVID-19 so far has thrown the provincial economy approximately 22% off its course. Employment plummeted 16% in the last two months though total hours worked fell even more by a staggering 32%. The government started to ease some restrictions at the end of April though we see the economic benefits being largely offset by lower energy output, and weak construction and tourism activity. 2020 GDP forecast: -11.0%.

Prince Edward Island: A poor tourism outlook also weighs heavily on PEI’s recovery. That said, the initial economic shock hasn’t been quite as severe as in other provinces, and stable health conditions (no coronavirus deaths reported so far) have put the government in a position to ease up on restrictions a little earlier than in other regions of the country. 2020 GDP forecast: -6.0%.

Nova Scotia: It’s been one of only three provinces not to impose a full lockdown on non-essential businesses. This has limited the economic damage of COVID-19. We expect a gradual recovery to take hold with softness in tourism, manufacturing and construction slowing the pace. The government began to partially lift restrictions on certain activities on May 1. 2020 GDP forecast: -5.9%.

New Brunswick: The province also was among those that didn’t lock down all non-essential businesses. To date there’s been no reported deaths related to COVID-19 in New Brunswick. The economic hit has been somewhat less severe than most other parts of Canada with employment declining ‘just’ -13.7% in March and April compared to -15.7% nationally. We expect the economy to get a boost from the government’s first round of easing of social distancing orders on April 24. Poor prospects for key provincial exports (including refined petroleum products and softwood lumber) will stall further improvement however. 2020 GDP forecast: -5.6%.

Quebec: Very restrictive social distancing and lockdown measures have taken a heavy toll on the economy—possibly slicing monthly GDP by as much as 26% in March and April. Despite the health situation remaining dire in Montreal, the Quebec government is forging ahead with a plan to reopen various activities including primary schools, daycare centres and manufacturing production mid-May (later in the month in Montreal). It lifted the lockdown in the construction sector on April 20. We believe these developments will give the economy a much needed shot in the arm. The pace of recovery is likely to taper off shortly thereafter though. We see significant challenges ahead for the aerospace sector, one of Quebec’s top exporters. 2020 GDP forecast: -7.0%.

Ontario: COVID-19 caused tremendous damage to Ontario’s economy in March and April, forcing more than a million people out of a job (-14.5%). The provincial government has taken a methodical, cautious approach to reopening the economy—starting small, and establishing a framework and guidelines first. This means the recovery will be gradual as well. Ontario’s highly diversified economy and strong entrepreneurial base will offer some protection against any potential global supply chain disruptions. 2020 GDP forecast: -6.2%.

Manitoba: The government initially took a softer line with businesses before hardening restrictions to non-essential businesses on April 1 (after the number of confirmed coronavirus cases rose materially in late-March). This has possibly limited the economic impact of COVID-19. Hours worked in Manitoba fell the least (-18%) among the provinces in March and April. The government began to ease some of these restrictions in early May with the health situation stabilizing since mid-April. We believe this will set a modest economic recovery in motion. 2020 GDP forecast: -4.8%.

Saskatchewan: The double-whammy from COVID-19 and the oil price collapse wiped out an estimated 16% of Saskatchewan monthly economic activity in April. While massive, it’s less than what we estimate for Alberta (23%) and Newfoundland and Labrador (22%)—Canada’s other oil-producing provinces. Saskatchewan’s economy has a comparatively smaller exposure to oil. The provincial government lifted some social distancing restrictions in early May and will allow some retailers and other businesses to reopen on May 19. We expect the economy to benefit. Continuing challenges facing major agricultural crops and other commodities will restrain the pace of the recovery, however. 2020 GDP forecast: -7.1%.

Alberta: More Albertans lost their job in March and April (360,000 or 15.5%) than in the last four recessions combined. Government plans to ease some restrictions and reopen parts of the economy mid-May will put some of those workers back to work. As will $1 billion federal funding to clean up orphaned wells. It will take a long time for Alberta’s economy to get back on its feet. Rock-bottom oil prices and global supply glut won’t help. We expect energy producers to stay in survival mode through 2020 (and possibly beyond), slashing expenditures and trimming output. This will significantly slow the recovery. 2020 GDP forecast: -11.2%.

British Columbia: The BC government has allowed non-essential businesses to continue operating so long as they met social distancing requirements. This relatively more permissive approach did little to contain the economic shock though. Employment plummeted by nearly 400,000 (or 15.6%) in March and April, representing a marginally faster pace of decline than in Alberta. Starting mid-May, the government will reopen parts of hard-hit sectors including retail and food service. It will be hotels’ turn in June. We expect these easing measures to kick start the economic recovery, which we see being sustained through the second half of this year by work continuing on the LNG Canada and other capital projects. 2020 GDP forecast: -5.1%.

This report was authored by Senior Economist, Robert Hogue, and Economist, Ramya Muthukumaran.