One year in, the pandemic continues to be the main preoccupation for the Prince Edward Island government—as it should. Health care is the fastest-growing expenditure item in Budget 2021, rising 7.7% to $846 million in 2021-2022. This will maintain significant pressure on government finances in the coming year despite the pace of other program spending slowing markedly. The government projects a deficit of $112 million (1.5% of GDP), down only slightly from an expected shortfall of $120 million in 2020-2021—the second-largest in the province’s history (in dollar terms). Budget 2021 paints a brighter medium-term picture. The three-year fiscal plan shows a sharp reduction in the deficit in the latter two years, reaching $28 million (or 0.3% of GDP) by 2023-2024. The government will achieve this primarily by restraining expenditures, including cutting non-health program spending outright in 2022-2023. With expenditures and the deficit set on a more sustainable course—and a view to stimulate the economy in an inclusive way—Finance Minister Darlene Compton announced targeted tax relief for lower-income individuals and small businesses.

Focus on tax burden, tourism, families and the environment

The tax measures include increases to the basic personal tax exemption amount (to $11,250) and low-income tax reduction threshold (to $20,000), as well as a reduction of the small business tax rate to 1%. All will come into effect on January 2022 and will cost $7.4 million. Minister Compton announced $3 million in non-repayable grants to help the tourism industry with the opening of the 2021 season. To help families, the government will invest $2.9 million on a half-day pre-kindergarten program, add 300 early-years child care spaces ($2 million) and increase front-line staff in the school system ($4 million). There were also several measures for a cleaner environment, including an expansion of the heat pump rebate program ($5.6 million) and rebates for electric vehicles ($500,000).

Despite rising, the province’s indebtedness remains the lowest among Atlantic Provinces

After jumping $220 million in 2020-2021, Budget 2021 projects the province’s net debt will rise another $209 million to $2.6 billion in 2021-2022. This will represent 35.4% of GDP—the highest level since 2015-2016. Things will improve after that. Lower deficits in the following two years will help the government rein in debt accumulation, setting the province’s net debt-to-GDP ratio on a declining path, reaching 33.8% by 2023-2024. Despite the sharp increase during the pandemic, PEI’s indebtedness remains the lowest among the Atlantic Provinces and compares favourably against most other provinces.

PEI has been a standard-bearer for decisive government action and public adherence to combat COVID-19. Collective efforts met remarkable success with very low case counts throughout the pandemic to prove it. Still, the pandemic took an enormous toll on the economy and the public purse. The past year was easily the most challenging in memory for the provincial government. Vaccination campaigns (in Canada and abroad) bring the promise of better days ahead. Yet, Budget 2021 strikes a prudent tone. Among other things, it sets aside a $50-million contingency fund to deal with unexpected developments. With variants threatening to reverse progress made to date worldwide against COVID-19, it’s a perfectly reasonable approach to take. Should vaccination campaigns deliver on their promise, however, the fiscal picture may improve more quickly than the government anticipates. 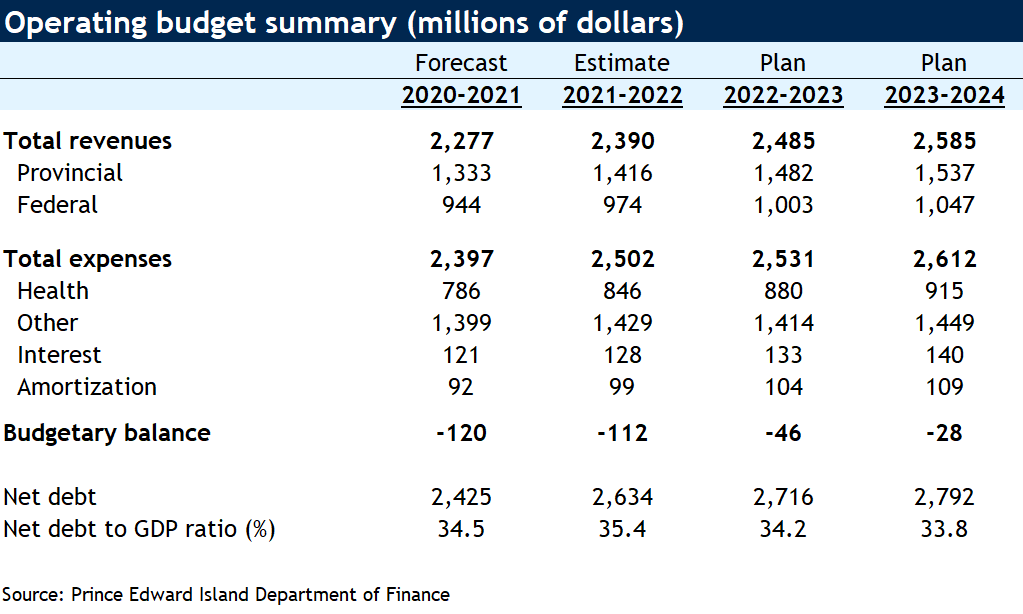