New Brunswick Minister of Finance, Ernie Steeves, said Budget 2021 was not a budget that he wanted to deliver, but a budget that the province needs. By this, he meant spending more to deal with the pandemic, and running a higher deficit. He projected the provincial deficit to surge to $245 million in FY 21-22 from $13 million in FY 20-21. This increase will likely buck the trend across the country as we expect the majority of other provinces to show smaller deficits next year. The main reason behind New Brunswick’s increased budgetary shortfall is the fact that expenditures will rise almost three times more (up $354 million) than revenues (up $122 million). Costs allocated to social development (up $68 million), health (up $47 million), post-secondary education (up $43 million), and general government (up $42 million) are mostly driven up by COVID-related expenses. Revenues are expected to grow more slowly, as federal transfers are projected to fall (by $151 million) after rising ($206 million) in 2019-2020. Nevertheless, the magnitude of the province’s deficit pales in comparison to deficits in the years following the global financial crisis. The longer-term outlook sees further red ink in FY 22-23 (deficit of $235 million) and FY 23-24 (deficit of $163 million) as the province supports the economic recovery. 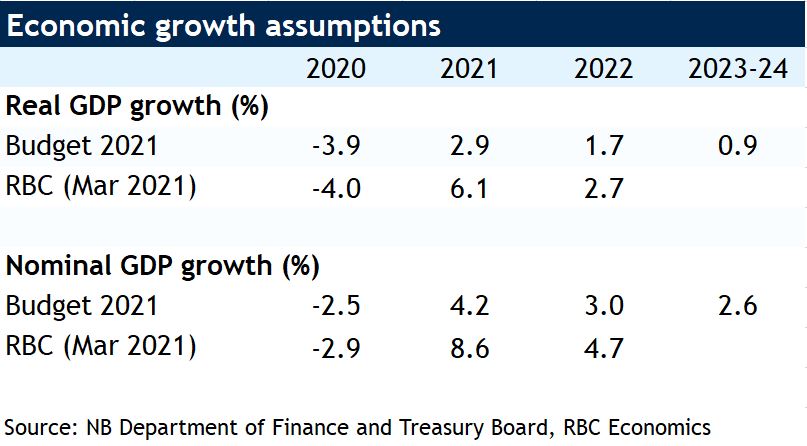 Budget 2021 projects expenses will increase 3.4%, or $354 million in FY 21-22. As Minister Steeves emphasized, New Brunswick will continue to maintain a level of support that is consistent with the ongoing COVID-19 pressures, with expenditures focused in key areas such as health care and social services. This support will cost the province an extra $64.7 million. There’s also an additional $7 million for mental health, $11.1 million to recruit physicians and $10.3 million to build new nursing homes. The province has penciled in a 6.8% increase in its allocation to education and job training, alongside mounting costs associated with seniors and long-term care, and higher income security allotments.

Revenue growth moderating as federal emergency funds are drawn down

Revenues are expected to increase by 1.2%, or $122 million, in FY 21/22—falling well short of mounting expenses. The province’s coffers will receive a boost from higher tax revenues, agency revenues and return on investments. Nevertheless, total provincial revenue growth will be restrained by a significant decline in federal transfers (down $151 million), as emergency funds run their course (including the Safe Restart Agreement, the Safe Return to Class Fund, and the essential worker wage top-up program). In the medium term, New Brunswick is budgeting for a contraction in equalization payments.

An “appropriate and responsible” capital plan

New Brunswick’s capital plan has allotted $673.4 million, a capital plan which Minister Steeves deems “appropriate and responsible.” This is an increase of $72 million, largely allocated to transportation and infrastructure. Over $128 million has been earmarked for health care infrastructure. New Brunswick faces a rapidly ageing population and is planning ahead. Health capital construction costs are up 70% from FY 20/21.