Fighting the pandemic, and helping people, businesses and the economy back on their feet will take a heavy toll on Ontario’s finances. This came out loud and clear in the 2020 budget—delivered eight months later than usual. The budget projects record deficits this year (-$38.5 billion) and in the next two (-$33.1 billion and -$28.2 billion, respectively) as spending soars and revenues drop. Net debt will balloon by $120 billion by 2022-2023. Yet this was largely expected. The fiscal update released at the end of March (in lieu of a full-blown budget) and August’s first quarter report already painted a bleak picture. If anything, the situation appears to have stabilized as the latest projection for this year’s deficit (-$38.5 billion) is unchanged from August.

The government’s pandemic action plan took centre stage in Budget 2020. This was in reality the third round of the plan first introduced in March and subsequently updated in August, nearly tripling in size from the initial $17 billion in the process. This budget expanded it by $15 billion to $45 billion over three years. All three pillars of the plan—protect, support and recover—are getting more money. Protecting Ontarians is seeing the biggest increase ($7.5 billion) which will mainly go to the fight against COVID-19 and support for long-term care residents. The government is also boosting assistance to families, workers and businesses to the tune of $2.4 billion, and adding $4.8 billion to economic recovery efforts like investing in broadband infrastructure, lowering electricity rates for many businesses and subsidizing tourism expenses in Ontario. 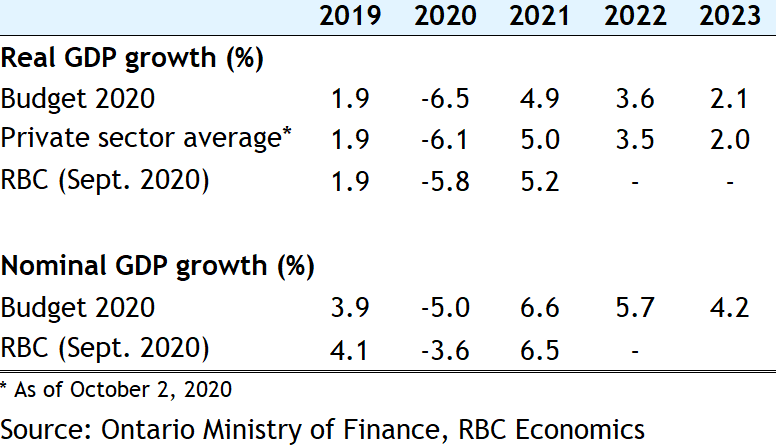 These highly unusual times make it very difficult for a government to plan ahead. Budget 2020 builds in several prudence measures to cushion against unforeseen developments, including $10.3 billion in special contingency funds in 2020-2021 (falling to $5 billion in 2021-2022 and $2.8 billion in 2022-2023), and a $2.5 billion contingency reserve (falling to $2 billion in the following two years). The budget even provides two alternative economic scenarios and corresponding deficit projections for the next two years. In the slower growth scenario (GDP growing at rates of 3.3%, 1.0% and 1.4% in the next three years), Ontario’s budget shortfall is $2.5 billion and $5.2 billion larger than the base case in 2021-2022 and 2022-2023, respectively. In the faster growth scenario (GDP growing at rates of 7.5%, 3.1% and 2.3%), the deficit is $5.4 billion and $6.9 billion smaller, respectively. The central economic scenario (shown in our table on the first page) itself is conservative—as a standard practice, the government sets the economic growth profile it uses for planning purposes slightly below the private sector’s average. While the fiscal plan isn’t shock-proof, we believe the inclusion of significant prudence measures is the right approach in the current circumstances.

There will be plenty of work to do in future budgets to address Ontario’s fiscal situation and bring it on a stronger longer-term footing. But for now at least, exceptionally low interest rates help Ontario (and other provinces) to afford doing whatever it takes to combat COVID-19, assist Ontarians and businesses, and stimulate the economy without having to cut back on other important missions. The guiding principles (or pillars) Budget 2020—protect, support and recover—are the right ones for the times. Flexibility and readiness to do more if needed might be others. But interest rates won’t stay this low forever. The post-COVID-19 chapter, whenever it begins, will be all about an exit plan. And the task at hand won’t be any easier. 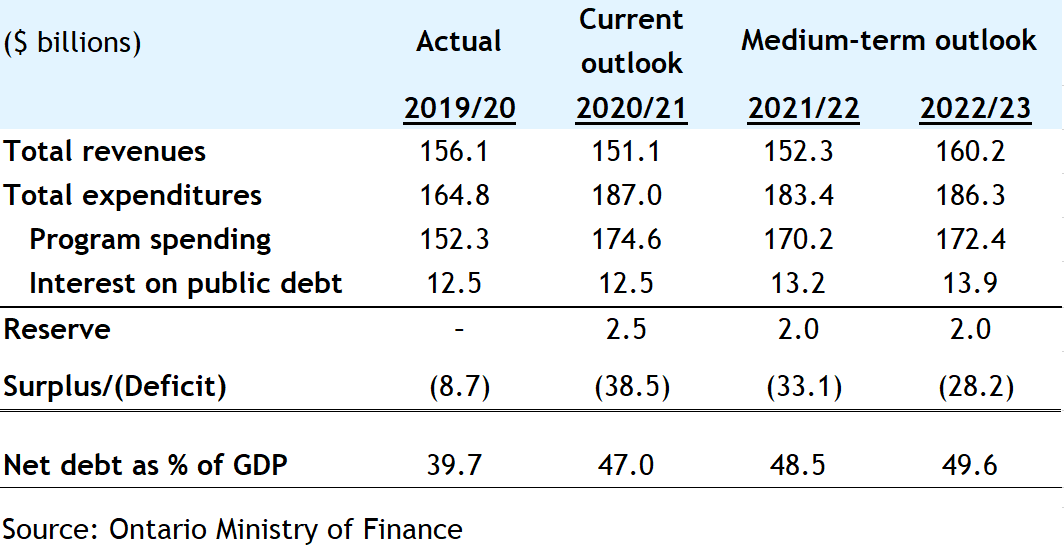