The Quebec fall fiscal update released on November 12 taught us little on this year’s provincial budget situation that we didn’t know already. The government is headed toward a record $15 billion deficit (3.4% of GDP) as it spends heavily to deal with the pandemic at a time when the most severe recession in generations crushes its revenues. This we knew from the June fiscal update which first revealed the extent of the damage to Quebec’s books (the budget shortfall was projected to be $14.9 billion at the time). The government in June pegged the costs of managing the health crisis at $6.3 billion and the loss of own-source revenue at nearly $10 billion—partially offset by a $4.1 billion increase in federal transfers. It also set aside a $4-billion provision as a prudence measure to round things off.

The latest snapshot did show a material bump-up in revenue projections relative to June (own-source revenue and federal transfers were revised up by $2.8 billion and $515 million, respectively), as well as downward revisions to some expenditures (including debt service payments). Yet the government intends on using all this increased budget room on $4.5 billion in additional health crisis spending, including more than $520 million on measures to stimulate the economy. This leaves the 2020-2021 bottom line virtually unchanged from June—and a big deficit it is.

What we learned from the fall fiscal update is the government projects to run deficits of $8.3 billion in 2021-2022 and $7.0 billion in 2022-2023. We also learned net debt will surge $18 billion (10.9%) this year to $189 billion and continue to climb in the next two years, reaching $207 billion by the end of 2022-2023. Net debt will jump 6.0 percentage points to 43.3% this year as a share of GDP but is expected to ease slightly thereafter. The projected debt-to-GDP ratios remain well below historical peaks though they are elevated relative to most other provinces. While the debt situation isn’t threatening to spin out of control, Quebec Finance Minister Éric Girard indicated it will be hard to achieve the province’s legislated debt reduction targets as currently stipulated. He reiterated his government’s openness to review the Balanced Budget Act to allow more fiscal flexibility.

At least for now, exceptionally low interest rates provide some degree of cushioning. Debt service costs are slated to fall 1.3% this year to $7.6 billion. The government expects to allocate only a modestly larger share of its income to service its debt over the next two years, rising from 6.4% to 7.5%.

Perhaps the biggest surprise of the fall fiscal update was the near disappearance of the 2019-2020 surplus. Estimated at $1.9 billion last March and revised higher to $3.0 billion in June, last year’s surplus has melted away to just $32 million. The government points to lower-than expected own-source revenue in March due to COVID-19, higher program expenditures and an upward revision to the assessed loss it is booking for its ownership participation in the CSeries airplane.

It’s important to note the budget balance figures reported by the Quebec government are after deposits into the province’s Generations Fund (a form of sovereign wealth fund). Those deposits will total $2.7 billion this year. Under more conventional accounting practices used in other provinces, the operating deficit would be $12.3 billion this year in Quebec, shrinking to $3.8 billion by 2022-2023.

The pandemic will leave long-lasting scars on the provincial budget. While the bulk of the three-year $13 billion action plan will be spent this year ($10.5 billion), covid-related expenditures are slated for the next two years as well. In fact, half of the $1.8 billion in new measures announced by Minister Girard in the fall fiscal update are earmarked for 2021-2022. Because of COVID-19 total expenditures are now projected to run $1.7 billion above the March budget baseline by 2022-2023. Revenues are seen $4.1 billion below the March baseline by that date. Realigning these trajectories will be a difficult task—especially over the five-year horizon required by current legislation. The government believes its annual deficit is structural to the tune of $5.5 billion to $7.0 billion. Minister Girard reaffirmed his government’s commitment to balancing the books. He set out five principles to do so: 1) refrain from adding to Quebecers’ tax burden; 2) tie spending growth to revenue growth; 3) boost the provincial economy’s potential; 4) continue the debt reduction efforts; and 5) seek more federal health care funding. These constitute a reasonable framework though it will require the cooperation of the federal government (Quebec is demanding the Canada Health Transfer cover 35% of provincial health spending). As for a more detailed plan to return to balance, we’ll need to wait a little longer to next year’s budget. Given the fluidity of the pandemic situation and high degree of economic uncertainty, that too is reasonable. 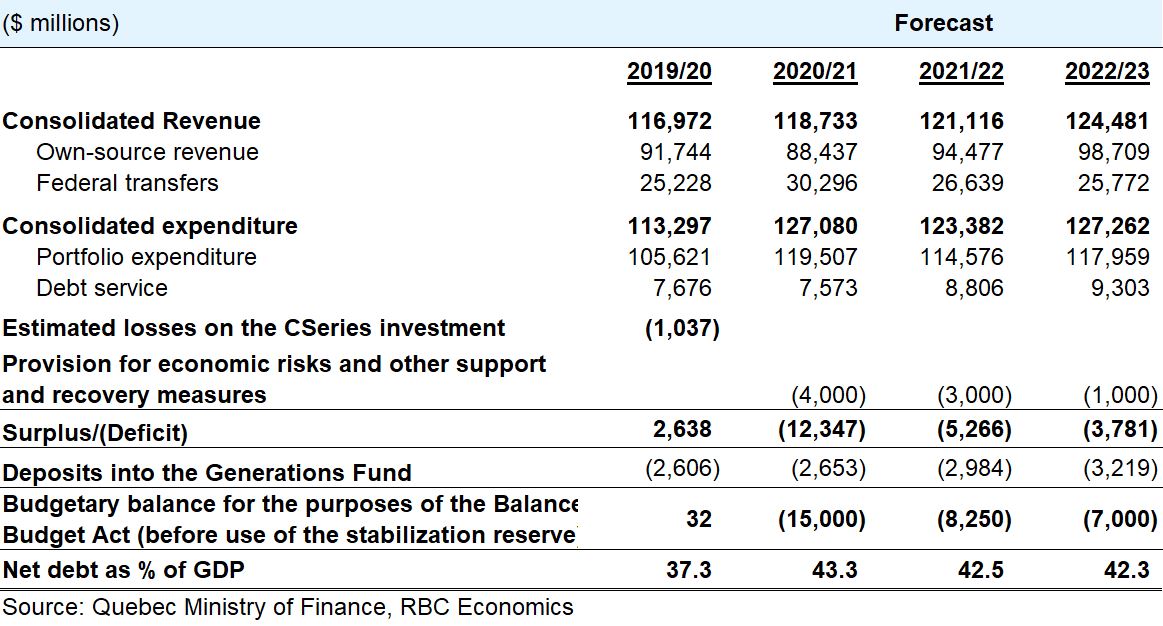