In a year that was expected to bring about a $7.4 million surplus, the COVID-19 crisis has meant a rapidly deteriorating fiscal balance for the province of PEI. The 2020 budget presents a record-breaking deficit of $173 million, close to 40% higher than the second-highest deficit in FY 2003/04 ($125 million). COVID-19 has presented a unique and unparalleled challenge for the province. With borders closed to non-essential travel, and uncertainty surrounding the possibility of summer tourism, PEI tourism revenues are expected to fall by 53%. At the same time, PEI is implementing measures to stimulate the province’s business sector, as restaurant closures here and abroad weigh on potato exports and oyster sales. Similar to other provinces, PEI has not released a multi-year outlook in Budget 2020.

Government revenues are expected to grow by 6.5% this year to $2.3 billion, entirely on the back of a $185 million increase (+23%) in federal sources, including a $75 million COVID-19 Response and Recovery transfer. Provincial own-source revenues will fall slightly (0.3%). Licenses and permits revenues as well as fees and services revenues are both set to decline by 6% with patient fees, park fees, and electricity cost recoveries tumbling, as Islanders opt to stay home amidst social distancing measures, and shuttered businesses result in lower electricity usage. Social development and housing revenues are forecast 15.3% lower this year. Budget 2020 introduced several measures to help stimulate the recovery, including a $500 increase in the basic personal income tax exemption to $10,500, as well as a reduction in the small business tax rate (down 1 percentage point) to 2%. PEI will be extending the Marked Fuel program this year (to the tune of $1.2 billion) to farm plated vehicles.

Budget 2020 consists of $2.5 billion in expenditures, up 12% from FY19/20. The province is running full speed ahead when it comes to public health spending commitments, which will grow by 6.6%. Big tickets items include $8 million in support for residents with disabilities and over $7 million allocated to long-term care homes and community care facilities. PEI health expenditures also incorporate a $15 million COVID-19 response and recovery contingency fund. Aside from health allocations, the province has earmarked $6.4 million for housing expenditures including the construction of new affordable housing units and the province’s Temporary Rental Assistance Benefit for PEI renters who have lost their jobs due to COVID-19. The province has also set aside $8 million in contingency planning for education expenses that may arise if a second wave of the virus were to occur. In addition to program and agency costs and interest and amortization, PEI has also set aside a one-time $50 million supplementary appropriation this year as a further prudence measure.

Despite facing a record-breaking deficit, PEI still managed to squeeze in new programs this year and extend those that were introduced just prior to the crisis. This year, federal support helped limit fiscal damage to the province. The province’s net debt-to-GDP ratio, although climbing quickly this year, is not at an unprecedented level. We have seen ratios within this realm or slightly higher in the past, and the province has managed to bring them down in subsequent years. PEI had strong GDP growth in 2019 (at 4.5%, the highest of any province) but we expect the province’s growth to decline by 5.7% this year. The province is also anticipated to lag others when it comes to recovery to pre-pandemic GDP levels. With an enormous surplus of potatoes, borders closed to summer tourism, and a near-term negative outlook for global aviation, the path to recovery is likely to be an arduous one. The province’s multi-year outlook will be at the mercy of the pace and duration of the recovery. While PEI was able to leverage federal fiscal support during the crisis, there is no guarantee of federal fiscal capacity for such sizeable supports in future budgets. 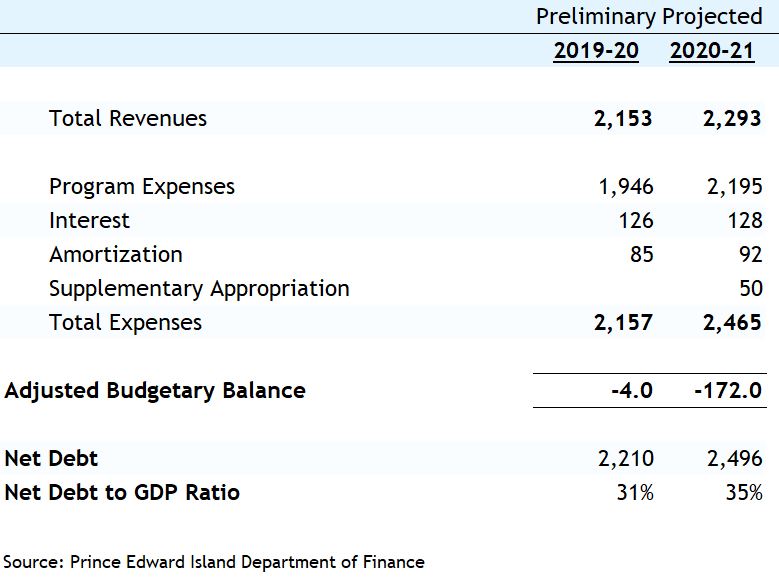