COVID-19 shocked global supply chains, prompting manufacturers to pivot production to medical equipment, and governments to scour global markets for life-saving vaccines, PPE and other goods that couldn’t be made at home. At the same time these shortages were exposing the lack of domestic production capacity for critical goods, factory closures, input shortages and logistical bottlenecks were revealing the fragility of global production networks. Together, these forces kickstarted a wave of enthusiasm around “reshoring” or undoing decades of outsourcing in order to revitalize domestic manufacturing and insulate economies from future shocks.

As we wrote last year in our Trading Places report, governments are engaging in activist industrial policies to build new domestic and regional supply chains in an effort to limit reliance on rivals. But bringing existing offshore production home and unwinding complex supply chains is another matter. And more than two years into the pandemic, there’s little evidence it’s happening.

Canada’s industrial policies include government support for domestic vaccine production and for retooling existing auto facilities to make electric vehicles. But beyond this, there’s not much to suggest a broader manufacturing resurgence is underway.

For one thing, employment in the sector isn’t exactly booming. In fact, it’s little changed from its pre-pandemic level, or the average seen over the past decade. Actual labour demand appears to have strengthened with a record 90,000 job openings in manufacturing. But that begs the question, how can Canadian businesses reshore production if they can’t fill vacancies? Labour shortages could be a key barrier to reshoring. Automation might be the answer, though Canada is a laggard when it comes to installing industrial robots. Manufacturers’ machinery and equipment investment intentions rose in 2022 but investment in factory construction fell to a decade low last year when adjusted for inflation. 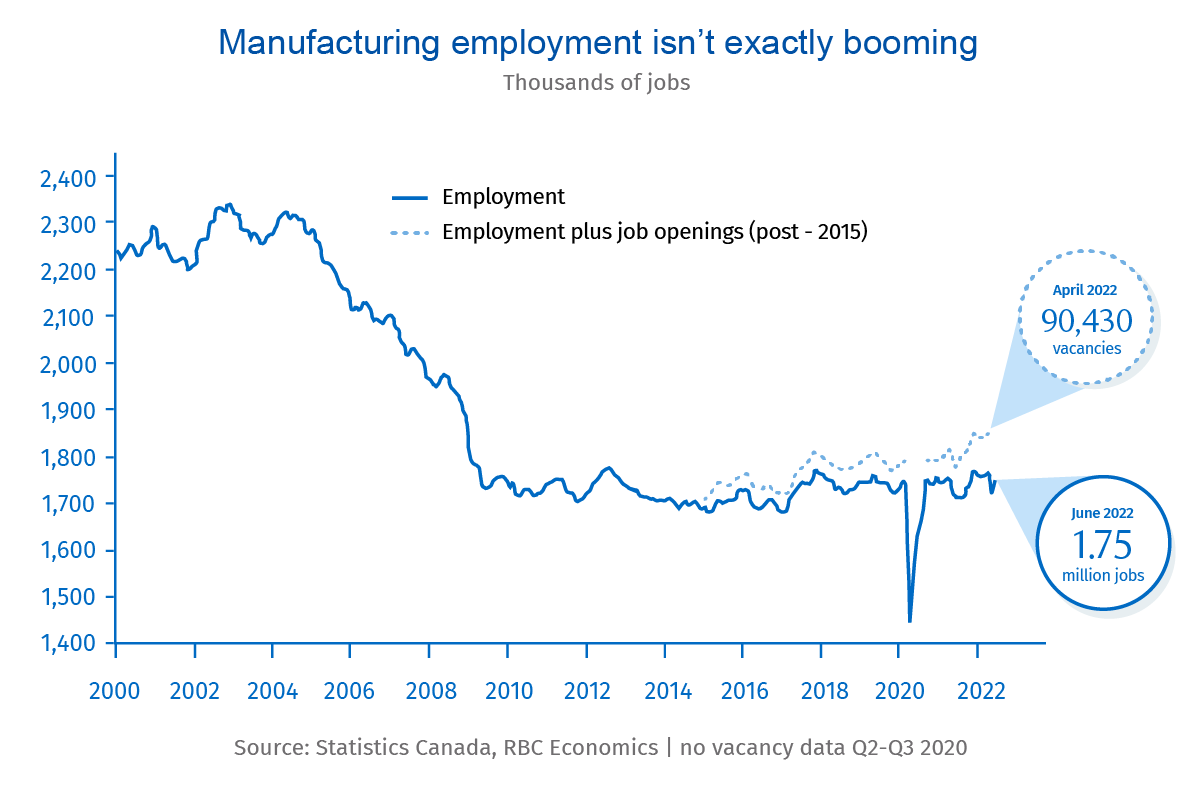 But there are few signs of production returning to Canadian soil

Production increased most in sectors like wood product manufacturing, petroleum and coal products, and food manufacturing—none of which rely significantly on imports to begin with. Industries dominated by foreign goods, like computer and electronic and electrical equipment manufacturing didn’t see any increase in production relative to imports.

If reshoring is about bringing back offshored production—not simply leveraging a country’s comparative advantage and increasing production that was always here—this has yet to occur in a significant way. 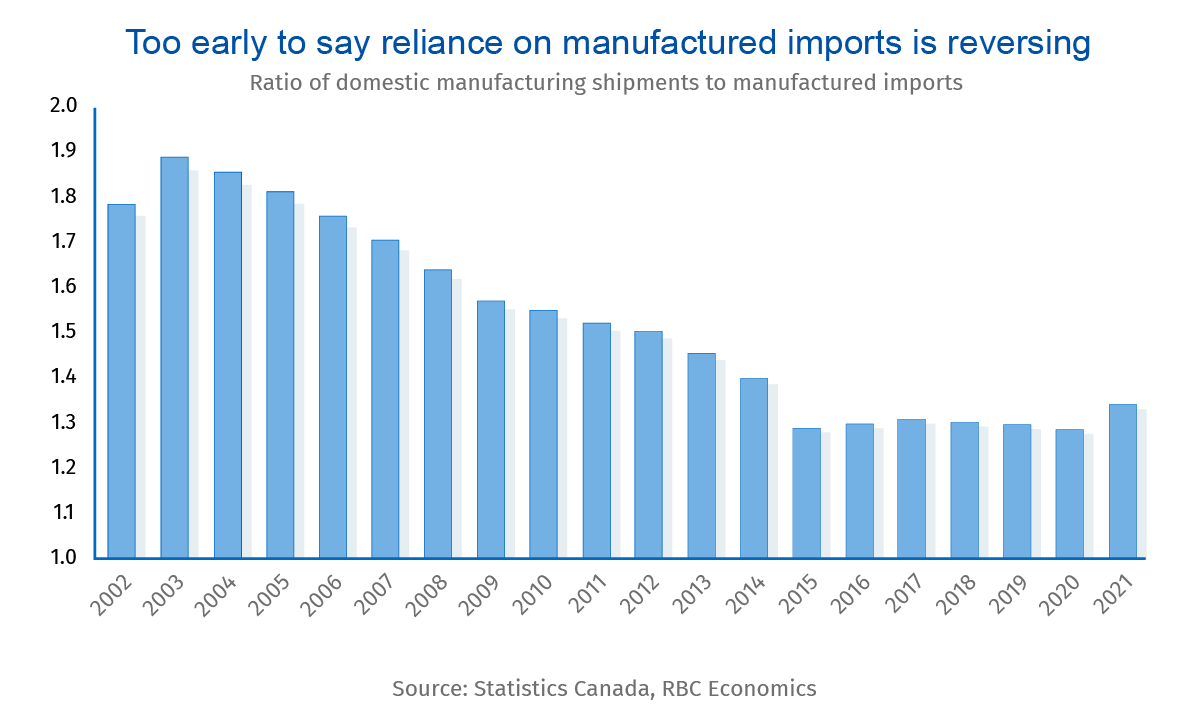 Canadian supply chains are longer and more global than ever

Perhaps this shouldn’t be surprising. After all, when manufacturers facing supply chain issues were asked how they planned to respond, relocating supply chain activities to Canada was last on their list. In fact, slightly more said they planned to relocate supply chain activities outside of Canada. In lieu of reshoring, firms plan to work with suppliers to improve delivery times, partner with new suppliers or substitute with alternatives. Indeed, Canada continued to diversify its imports in 2021, reducing its reliance on any single trading partner.

If firms aren’t relocating supply chain activities to Canada, are they at least “near-shoring” or bringing them closer to home? This doesn’t appear to be the case. In fact, Canada’s imports are coming from further afield than ever before (based on the geodesic distance between Canada and its trading partners). Over the course of the pandemic, several Asian countries, most significantly China, increased their share of Canada’s import market at the expense of countries like the US, Mexico and the EU.

Finally, it’s worth noting that reshoring could be a two-way street, with domestic jobs and investment potentially exposed to other countries’ efforts to bring production home. Canadian manufacturing relies on foreign capital—FDI in the sector is 1.7 times Canadian direct investment abroad. More than one in three manufacturing employees work for a foreign multinational, nearly three times the rate of the broader Canadian economy. And for every foreign worker employed by a Canadian manufacturer abroad, 1.2 Canadians are employed domestically by a foreign multinational.

Given this, a broader reshoring push might not be a good thing for Canadian manufacturing. On the contrary, the sector might be better served by other efforts to improve supply chain resilience, which already appear to be underway. While government policies might support domestic production in a few strategic areas, few businesses seem to see reshoring as the answer to supply chain issues. 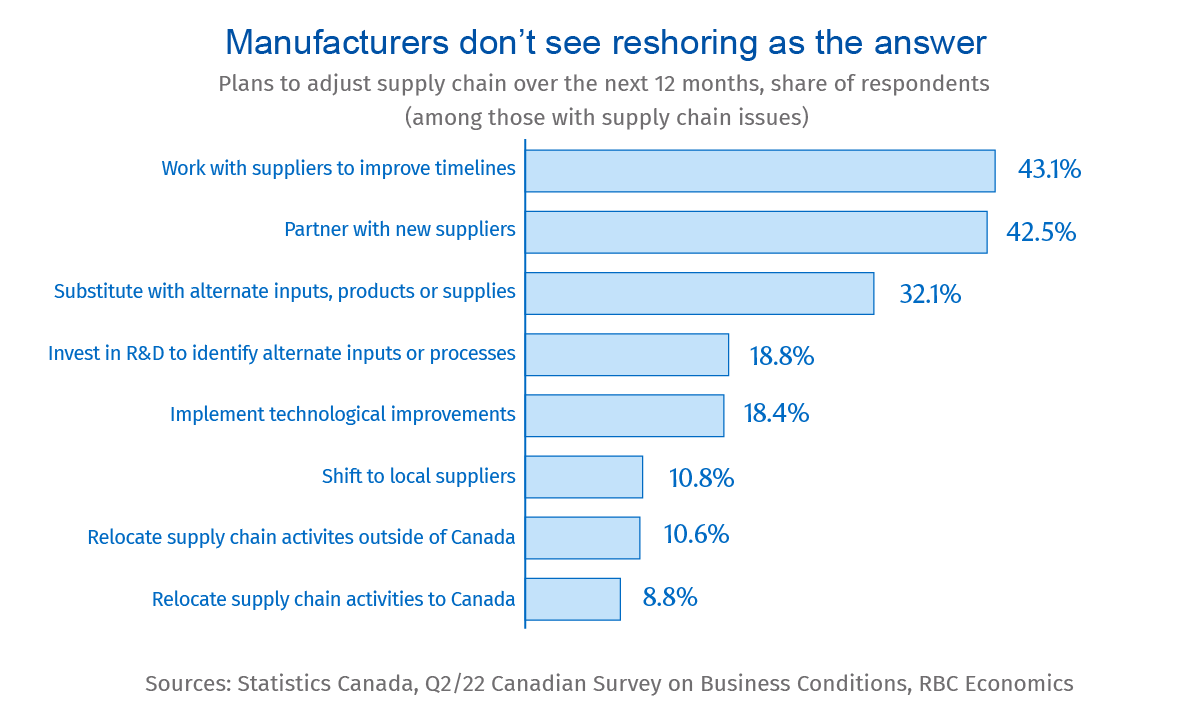