Provincial Economies: Diverse yet Together in Experiencing Historic Recession

No economy in the world is emerging unscathed from the coronavirus. Neither is any Canadian province. Each is facing an unprecedented (or close to unprecedented) decline in activity this year. Viral transmission rates have varied from coast to coast and so have the stringency of containment measures and reopening timelines. These differences dictate the severity of the economic shock across the country. Relatively better health outcomes and faster easing of restrictions limited economic damage in Manitoba, Saskatchewan and most of the Atlantic Provinces. Alberta and Newfoundland and Labrador, on the other hand, have been further challenged by plunging oil prices, sapping a major source of revenue. British Columbia, Ontario and Quebec are experiencing a downturn of roughly similar magnitude as the 6.0% contraction we project for the national economy.

The good news is the worst of the shock is behind us—provided any future waves of the pandemic require a lighter containment touch than what was necessary to flatten the first wave. The labour market has started to recover. Consumers are spending again. The housing market has bounced back. In fact, the early phase of the recovery has been surprisingly strong in many provinces. We expect the pace to slow as the reopening effect fades, however.

We project Manitoba’s economy to contract the least on an annual basis this year (-3.8%), thanks in part to sustained capital investment. Our growth rankings have the Maritime provinces coming next—with PEI (-4.0%), New Brunswick (-4.5%) and Nova Scotia (-4.8%) among the first provinces to ease restrictions—where initial job losses weren’t as extensive and rebounding foreign demand for seafood supports exports. Saskatchewan (-5.0%) also experienced less severe job losses in March and April, and is getting a lift from recovering agri-food exports.

We downgraded our growth forecast for British Columbia (to -5.6%) on greater-than-expected labour market weakness to date. We remain relatively bullish on the province’s growth prospects next year with large capital investment projects poised to generate substantial activity. Ontario (-5.8%) and Quebec (-5.8%) both struggled with high coronavirus transmission levels through the spring. These prompted the strictest containment measures in Quebec, which slammed the labour market more than in any other province in March and April. In Ontario, high COVID-19 case counts led to a slower pace of reopening, holding back the early phase of recovery.

Oil-producing provinces had it worse throughout the crisis. They’ve been walloped by the double whammy of the pandemic’s massive economic disruption and plunging oil prices pummeling their energy sector. We project Alberta (-8.7%) and Newfoundland and Labrador (-10.9%) to be at the bottom our growth rankings in 2020. While we expect growth to resume next year, it will likely take years to recover the ground lost. 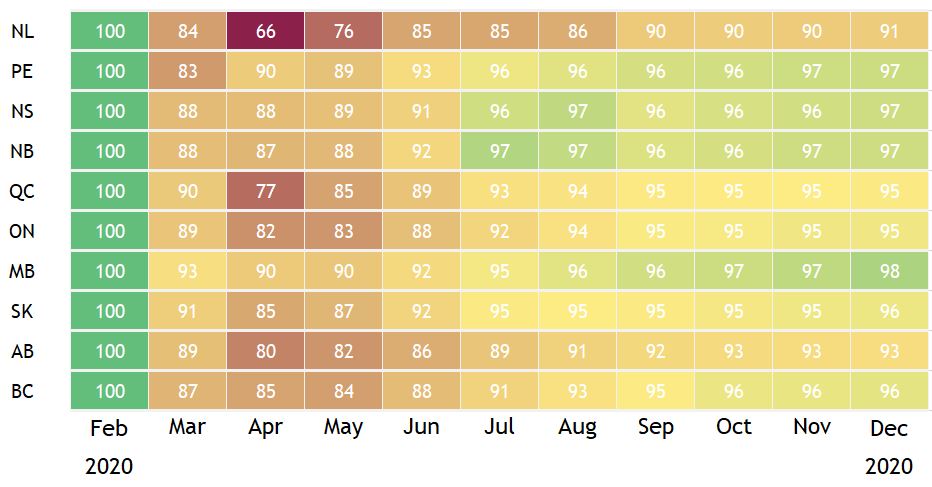 This report was authored by Senior Economist, Robert Hogue, and Economist, Carrie Freestone.