COVID-19 quickly rendered all fiscal projections made before mid-March completely obsolete. Quebec’s 2020 budget released March 10 is a case in point. Just a few days before the World Health Organization declared a global pandemic and subsequent lockdown of large parts of the economy, the provincial government was still projecting sustained economic growth and a balanced budget for the next five years. Fast-forward to this morning’s fiscal update and the new, tougher reality is sobering. Quebec Finance Minister Eric Girard now expects a brutal 6.5% economic contraction and spike in COVID-related spending will swing this year’s budget into record deficit: -$14.9 billion (3.4% of GDP). Net debt is projected to rise as a share GDP from 37.2% in March 2020 to 43.0% in March 2021, halting a seven-year string of declines.

The government projects the economic shock will cost the province $9.6 billion in lost own-source revenues (relative to previous baseline) though a $4.1 billion increase in federal transfers will provide a partial offset. Higher debt service costs and increase in expenditures unrelated to COVID-19 will put the net shortfall at $4.6 billion. The costs incurred by managing the health crisis is estimated at $6.3 billion. This includes $3.5 billion to strengthen the health care system, $1.9 billion to mitigate the economic impact of the pandemic and $910 million to helps workers and individuals. The government also set aside a large $4.0-billion provision as a prudence measure against economic risks and the potential need for further support and recovery measures. Altogether these developments and measures swung Budget 2020 into a record deficit (in dollar terms) from the balanced position projected on March 10. Incidentally, the $14.9 billion deficit just happened to match the stabilization reserve the government (and its predecessor) built up by running surpluses in the past five years—which is the maximum deficit the government was legally allowed to run. The stabilization reserve is an accounting construct (not a true reserve) designed to smooth the budgetary balance over the economic cycle.

It’s important to note the Quebec government is continuing to deposit money into its Generations Fund (a form of sovereign wealth fund) to the tune of $2.6 billion this year. This is down only marginally from the $2.7 billion expected in March. Under more conventional accounting practices used in other provinces, the operating deficit would be $12.3 billion this year in Quebec.

Committed to balancing the budget within five years

The fiscal update didn’t provide revised projections beyond the current fiscal year. Finance Minister Girard, however, indicated his government is committed to balancing the books within five years. He added it will be done without compromising public services nor adding the Quebecers’ tax burden (one of the heaviest in the country). The government projects a strong 6.0% rebound in economic growth in 2021 and full recovery from the recession by the end of 2021. We believe it’s more likely to take place sometime in 2022 with growth coming in next year at 4.3%. Nonetheless, we agree a return to balance is achievable over the medium term. Quebec likely ran structural surpluses prior to COVID-19, offering a strong base from which to restore the province’s fiscal situation once the health crisis and recession have passed. 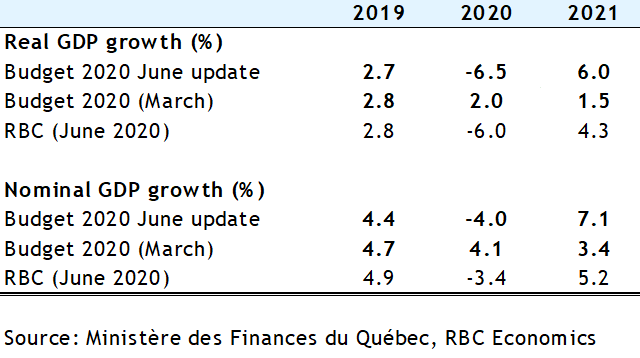 In fact, today’s update included an upwardly-revised $3 billion surplus in 2019-2020 (from $1.9 billion in March and zero in the original 2019 budget). This CAQ government and its predecessor Liberal administration have exhibited a clear pattern of significantly understating budget surpluses over the past several years. This allowed the government of the day to reduce Quebec’s elevated debt both relative to the size of its economy and, in some years, in absolute terms. The province’s net debt-to-GDP ratio was reduced from a high of 50.7% in 2012-2013 to 37.2% last fiscal year—below Ontario’s 39.9%.

This year’s large deficit and the government’s plan to speed up infrastructure investment to spur the economic recovery will drive up the provincial debt markedly. The government expects net debt to climb almost $20 billion (+11%) to $190 billion at the end of 2020-2021. This will represent 43.0% of GDP—still well below the all-time high. Finance Minister Girard said his government will look into reviewing the 2025-2026 debt targets set out by the province’s debt reduction law.

…and so will the financing program

The government more than doubled this year’s financing program relative to the figure it projected in March to $32.1 billion. This also up from $20.0 billion in 2019-2020.

None of what the Quebec government announced today was really a surprise. Finance Minister Girard for some time had warned COVID-19 would plunge the province into a large deficit in the range of $12 billion to $15 billion. Record deficit projections announced earlier this week by Saskatchewan and Prince Edward Island clearly signaled 2020-2021 would be a fiscal annus horribilis for all governments. Managing the health crisis, supporting businesses and individuals getting through this tough period, and stimulating the recovery are—and should be—the focus right now. Taking back full control of the fiscal ship will become a priority for the coming years. 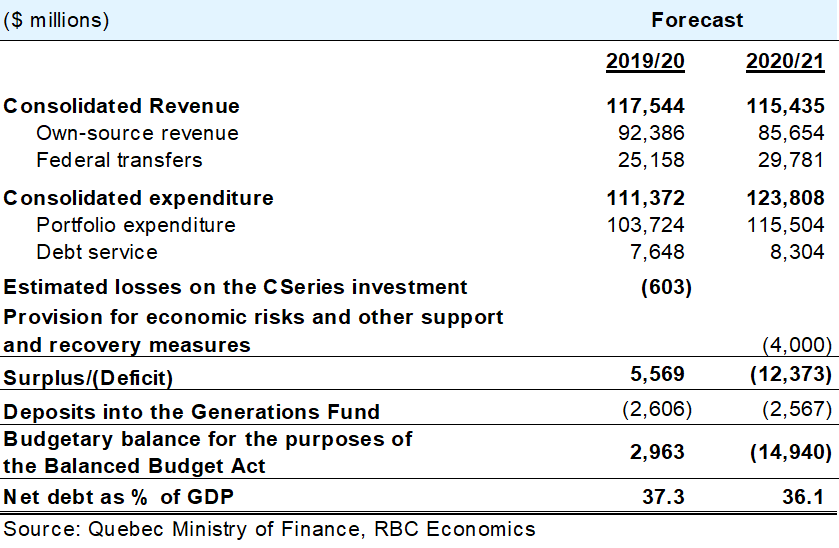