The Cost of Credentials: The Shifting Burden of Post-Secondary Education in Canada

If you're the parent of a university-age child wondering why your son or daughter can't seem to cover as much of the cost of tuition as you did, here's something you should know.

Back in 1990, when the parents of many of today’s post-secondary students were themselves in higher education, it took 293 hours of minimum-wage work to pay for the average tuition. Today, it takes 505 hours.

Those numbers underscore a big shift in who pays for university education in Canada. Years of belt-tightening have led to a sharp reduction in governments’ share of funding for university education. It has fallen by nearly half since 1990, while the cost of tuition has risen by 2.7 times in real terms, according to a new RBC Economics report. While families have stepped in to fill the funding gap, many students—particularly those in lower-income households—have had to turn to borrowing. And that’s left a subset of new graduates entering the workforce with sizable debts.

In the most recent academic year, the average annual tuition cost for an undergraduate degree in Canada (excluding Quebec) jumped by 3.1% to $7,600. That reflects a decades-long trend of tuition costs outpacing inflation. Compulsory fees add around $900 to the bill. (And for those studying away from home, living costs can tack on another $12,000 or more.)

Families are picking up some of the tab. The share of Canadian households with children who had an RESP recently stood at 47%. While that was up from just 16% in 1999, higher-income households were more likely to have one, and on average contribute three times more. Universities have boosted support for students—they currently spend some $2 billion annually on scholarships and bursaries—but that assistance only partially blunts the rise in tuition costs.

The upshot is that half of newly minted bachelor’s degree holders walk off campus with some form of student debt, and surveys show the percentage of those with a heavy debt load—more than $25,000—has doubled in the past decade. Three years after graduation, nearly a quarter of bachelor’s graduates with government student loans still owe more than $25,000. For those individuals, debt acts as a brake on other spending that we typically associate with entry into working life, such as buying a car or a home.

Graduating students can find some comfort in the fact that the median university graduate employed full-time earns 63% more than the equivalent high school student. And that’s at the heart of why Canadian students and their parents are willing to work harder, save more, or borrow more, for ever-rising tuition rates. 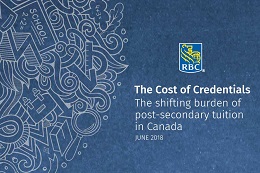