Why Women Are Ready for Work in the Automated Future

When police constable Lisa Kennedy responds to a difficult call, she draws on a surprising background to stay calm and composed — her previous job at a pet store.

Kennedy started her career as a sales associate with Pet Valu, working her way up to a supervisor position, where she managed a team of auditors. From pet supplies to policing may seem like a big leap, but a new RBC report released ahead of International Women’s Day suggests women are well positioned to harness their skills to make career transitions such as Kennedy’s.

The report, Advantage women: how an automated future could play to women’s strengths, finds that in the age of automation, women are more likely than men to lose their jobs. Despite high-profile attention paid to things such as auto plant closures, 54% of at-risk jobs, or 3.4 million, are held by women. Jobs such as administrative assistants, clerks and bank tellers — which are more likely to be filled by women — are losing ground to new software, self-checkouts and ATMs. 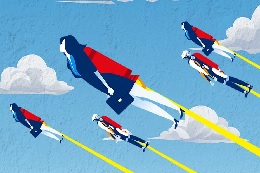 But even though women are at a greater risk of losing their jobs to automation, they are also more likely to possess the skills required for the jobs of tomorrow. Women are largely concentrated in occupations that use more general and social skills, or what we call “human skills,” like working with clients and customers — roles that involve handling situations a robot can’t.

This means even as particular tasks are automated, the skills that women are more likely to possess continue to be in high demand: the ability to interact with the public, build interpersonal relationships and care for others. They’re also more likely to have worked with computers and be familiar with digital technologies. This sets women up well to transition into growing job fields, including early childhood education, veterinary technicians and nursing or home support work.

Meanwhile, men are more than three times as likely to be in construction jobs, and more than twice as likely to be in manufacturing — positions that are also at high risk of being automated, but where the required skills are more task-specific and specialized, like repairing and operating machinery. It’s this divide between generalists and specialists that may determine success in the automated future, and why women are more likely to find new careers by building on their existing skills.

Kennedy sees “so many” links between her old job and her new one: the need for communication and digital skills, and problem-solving abilities. There is also a surprising amount of paperwork in policing, which requires making detail-oriented notes, just like in audits.

When the retail chain was implementing a new computer operating system, she was on the frontlines — which turned out to be good training for the frontlines of policing.

“I remember my first experience being sworn at by one franchisee who was angry about the new computer system,” Kennedy said. “It taught me how to be composed when dealing with difficult people.”

With creative thinking and fresh training, women are well-positioned to continue making gains in tomorrow’s labour market. But they can’t do it alone. RBC research also finds women are still substantially underrepresented in management positions, which are among the jobs least at risk of automation. Among young Canadians aged 25 to 29, men are almost twice as likely to be in a management occupation as women.

The policy challenge is to help workers adapt to a changing workplace, while leveraging the opportunity that disruption opens up to bridge the management skills gap and boost women’s representation in leadership roles.

John Stackhouse is a nationally bestselling author and one of Canada’s leading voices on innovation and economic disruption. He is senior vice-president in the office of the CEO at Royal Bank of Canada, leading the organization’s research and thought leadership on economic, technological and social change. Previously, he was editor-in-chief of the Globe and Mail and editor of Report on Business. He is a senior fellow at the C.D. Howe Institute and the Munk School of Global Affairs and Public Policy. His latest book is Planet Canada: How Our Expats Are Shaping the Future, which explores the untapped resource of the millions of Canadians who don’t live here but exert their influence from afar.