Today, the Department of Finance announced changes to the insured mortgage stress test that will come into effect on April 6, 2020.

The new system will be more responsive to actual mortgage rates than the current posted rate system, but could also be more volatile. Depending on the specifics, it may also boost demand in the near term. Our best guess of what such a system might look like is below.

While it remains to be seen how the new rate compares to the current qualifying rate (the median rate is not yet published by the Bank of Canada), a big change in April could have a meaningful impact on housing markets across the country. Should the median rate used in the new test look similar to the average 5-year fixed rate for insured loans at chartered banks published by the Bank of Canada, households could see qualifying rates that are about 30 basis points lower. For the average household in Toronto with an income around $100,000, this would increase how much they can borrow by about $13,000. Borrowers with higher incomes or larger down payments would see their maximum loan sizes move up somewhat more.

Overall, much will depend on how rates move in the near term. Our forecast calls for a rate cut by the Bank of Canada in April 2020. Given the current low level of rates and with markets fully priced for a cut in July, there is limited scope for market rates to move significantly. As the chart above shows, moving to a market based qualifying rate will likely inject some volatility for households as market conditions pass through to the qualifying rate more quickly. While the new test may lower the bar as of April, it may make qualifying a bit more difficult if rates start to rise, as they did in 2018. 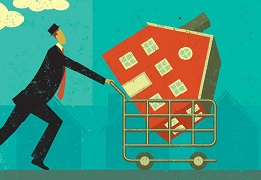