It’s been nearly five months since the government updated us on its most expansive period of spending ever, and nearly 18 months since its last formal 5-year budget. When the government last tabled a full budget, terms like PPE and vaccine agreement weren’t in most Canadians’ vocabulary. Today’s update packed a slightly improved economic outlook, a worsening deficit, and the potential for significant future stimulus into one 237-page package. In a normal year, any of those items would be noteworthy, but together, they sum to historic spending. Here’s what stuck out to us in today’s report:

Ottawa told us it will spend nearly $382 billion more than it takes in 2020-21, as the government’s response to COVID-19 adds $275 billion to program costs. This is $39 billion higher than forecast in the July fiscal snapshot, mostly due to new spending. And, the fiscal update includes a six-year forecast, projecting the 2021-22 and 2022-23 deficits at $121 billion and $51 billion, respectively, before any major spending initiatives linked to commitments made in the fall Speech from the Throne.

The biggest wild-card in today’s announcement will be revealed only in the spring budget: how the government will spend $70-100 billion in additional stimulus it will undertake over the next three years. While this will push program spending much higher in the medium-term, the update takes pains to suggest this stimulus would be temporary and growth oriented. Only time will tell.

While uncertainty has narrowed, there are still risks to the spending outlook

Uptake on support programs may not be exactly as the government expects, as they revised down their expected cost by $27 billion. Economic developments since July improved the fiscal outlook by $14 billion relative to what they expected at the time. Program expansions, additional PPE, funding for long term care homes, and for testing added to overall costs. Altogether, spending since July cost $79 billion over two years and today’s announcements added about $52 billion over the same period. At the same time revenues have fallen, recovering over the next few years.

The range of estimates for economic activity has narrowed significantly since July’s snapshot, but uncertainty around the economic impact of lockdowns over the winter remains. The government outlined two potential scenarios in which public health restrictions worsen the deficit. A scenario in which outbreaks lead to closures, but are limited to high-contact services like restaurants and entertainment, could add $7 billion to the deficit in each of this year and next. A worse scenario with more significant lockdowns, limiting activity to essential outings like in the spring, would more than double this impact to $16 billion annually.

The government’s stimulus plan for the $70-100 billion it has penciled in over three years, depending on how the labour market indicates the economy is doing, adds to that uncertainty. We got little in terms of rules for this spending, with the update suggesting details would be ironed out in the spring budget. If those supports lean towards the income-supporting transfers we’ve seen so far, and are delivered later in the five-year forecast, they could add stimulus when it’s no longer required. Accordingly, we hope Budget 2021 outlines a plan for growth-enhancing stimulus investments that help tackle a growing national debt (which will peak at 52.6% of GDP, without added stimulus).

The government has indicated stimulus funds will be for temporary programs, which suggests increases in debt may be quick to arrive and worsen the picture only slightly. Still, they note that a new fiscal anchor will only be introduced when the economy is more stable, which leaves much up in the air for now.

Extensions of the CEWS and rent subsidy were major additions to today’s announcement. The wage subsidy will carry through June 2021, but today the government announced the program would be more generous in response to a second wave: The maximum subsidy rate will increase to 75% until mid-March, rather than decreasing as the government had previously planned. The current subsidy rate for rent and additional support for locked down firms was also extended through to mid-March. These enhanced programs, if taken up as expected, will cost an additional $16 billion this year and next, and provide critical support for Canadian firms, and their employees.

The government further announced targeted support for hard-hit sectors as we previewed last week, covering regional airlines, airports, the arts and live events sector, and tourism and hospitality. Support will mostly come in the form of low-interest loans over terms up to ten years. Structured as loans, this support should cost the federal government relatively little (in the form of potential loan losses and interest on the debt used to fund loans), but given the already high debt loads of Canadian firms, it may not see significant uptake. Still, these firms will be supported by the other programs above for some time yet.

As we guessed in our preview, most of the spending today was in the form of these extensions of programs that bridge businesses to the other side of the crisis. Still, targeted stimulus of nearly $13.5 billion over 6 years indicates where the government may focus future stimulus measures. This would, in normal years, be considered significant spending.

The government penciled in a temporary increase in the Canada Child Benefit for Canadians with children under six, targeted at those with low and middle incomes, totaling $2.4 billion in new spending. The payment should help support those struggling to afford childcare on fewer hours of work, but leaves more comprehensive changes to Canada’s childcare system for later budgets. Investments to support hiring of early childhood educators could signal the kind of programs the federal government is looking at.

Climate change spending will see some significant funding later in the five year forecast period, with investments in nature-based climate solutions (e.g., tree planting), an extension of the government’s support for zero emission vehicles, and building retrofits by homeowners. The government signaled support for a border carbon adjustment, which would effectively apply Canada’s carbon tax to imported goods and services, though promised to work with international partners to make sure the system was fair for businesses. We’ll have to wait and see how meaningful such a system would be for Canadian businesses, who may see their exports taxed by other countries, too.

Investments aimed at supporting skills and training, in particular for youth and indigenous people will add $1.2 billion to spending, including by eliminating interest on student loans in 2020-21, beefing up summer jobs programs, and job placements. This addresses the larger impact the recession has had on young people, and help reduce longer term labour market impacts for these groups.

Revenues measures were targeted, and limited

The government announced efforts to apply sales taxes to digital goods and services, as well as sales from online platforms that fulfill orders from large warehouses in Canada. It also intends to apply corporate income tax to these entities, working faster than international bodies who have tried to coordinate a response across developed countries. While the tax lift is moderate, $6.5 billion over five years, these investments put the desire to raise revenues in sharp relief.

What may once have been considered a significant tax proposal, now pales in comparison to the potential for long-term deficits. The debt will accordingly rise this year and next, before slowly falling. But additional stimulus isn’t yet accounted for, and could keep debt rising for longer. The government may then be tempted to look for new, more significant revenue sources.

Financial requirements are lower than expected

Despite the higher deficit, financial requirements for 2020/21 were revised down from C$469bn in the July snapshot to C$448bn today. Increased spending was more than offset by the removal of $50 billion in insured mortgage purchases. Aggregate bond issuance of $374 billion tracks recent auctions sizes and the frequency for each sector: The $35 billion decline is in short-term bonds (2-year, 3-year, and 5-year), while 10-year ($74 billion) and 30-year ($32 billion) sectors were maintained at the same levels as July and are a slightly higher proportion of bond issuance. The main surprise was an increase in the planned FY-end treasury bill stock to $329 billion, a $35 billion increase from the July snapshot and well above recent tracking of closer to C$250bn. The offsetting changes in bonds and bills combine with a smaller financial requirement to imply about a $21 billion increase in the planned Government of Canada cash balance at FY-end. Looking ahead, the government is projecting financial requirements of C$118bn in 2021/22 and $26 billion in 2022/23, the latter reflecting some repayment of CEBA loans. Neither of those numbers include any of the aggregate C$70-100bn in additional stimulus set aside for 2021/22 through 2023/24. 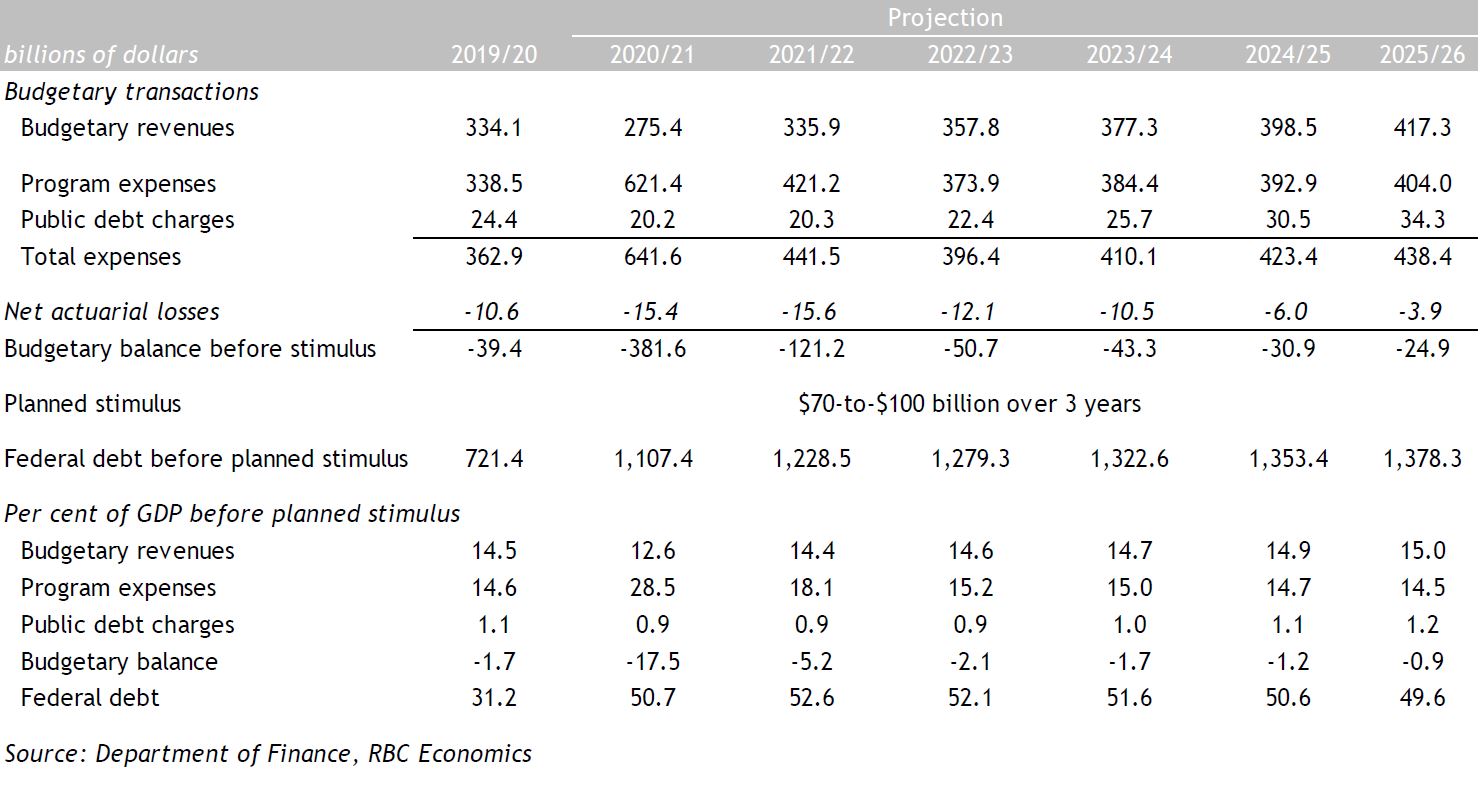