Across the globe, green investment is picking up speed. That’s good news, since annual spending is an eighth of the US$6.5 trillion needed to transition the global economy away from fossil fuels. Across the OECD, investment in climate-friendly technologies has doubled in five years, and grown twelve-fold since 2005.

But in Canada, we’ve lagged since 2014, when spending on clean technologies fell sharply. Though we’ve made up some ground in the last few years, the pace of spending is still about half that of other major economies. China leads the pack, spending about 1.5% of GDP on green investment each year. In some key industries, it’s the undisputed global leader, dominating solar panel and battery manufacturing, accounting for 40% of the world’s nuclear reactors under construction, and recently overtaking Europe in the share of electric vehicles sold.

Historically a leader, Europe spends around 1% of GDP on green investment. The U.S., Australia and Japan are further behind. But a major shift is coming south of the border. The recently passed U.S. Inflation Reduction Act will pump US$370 billion into clean investment, and leverage additional money from the private sector. 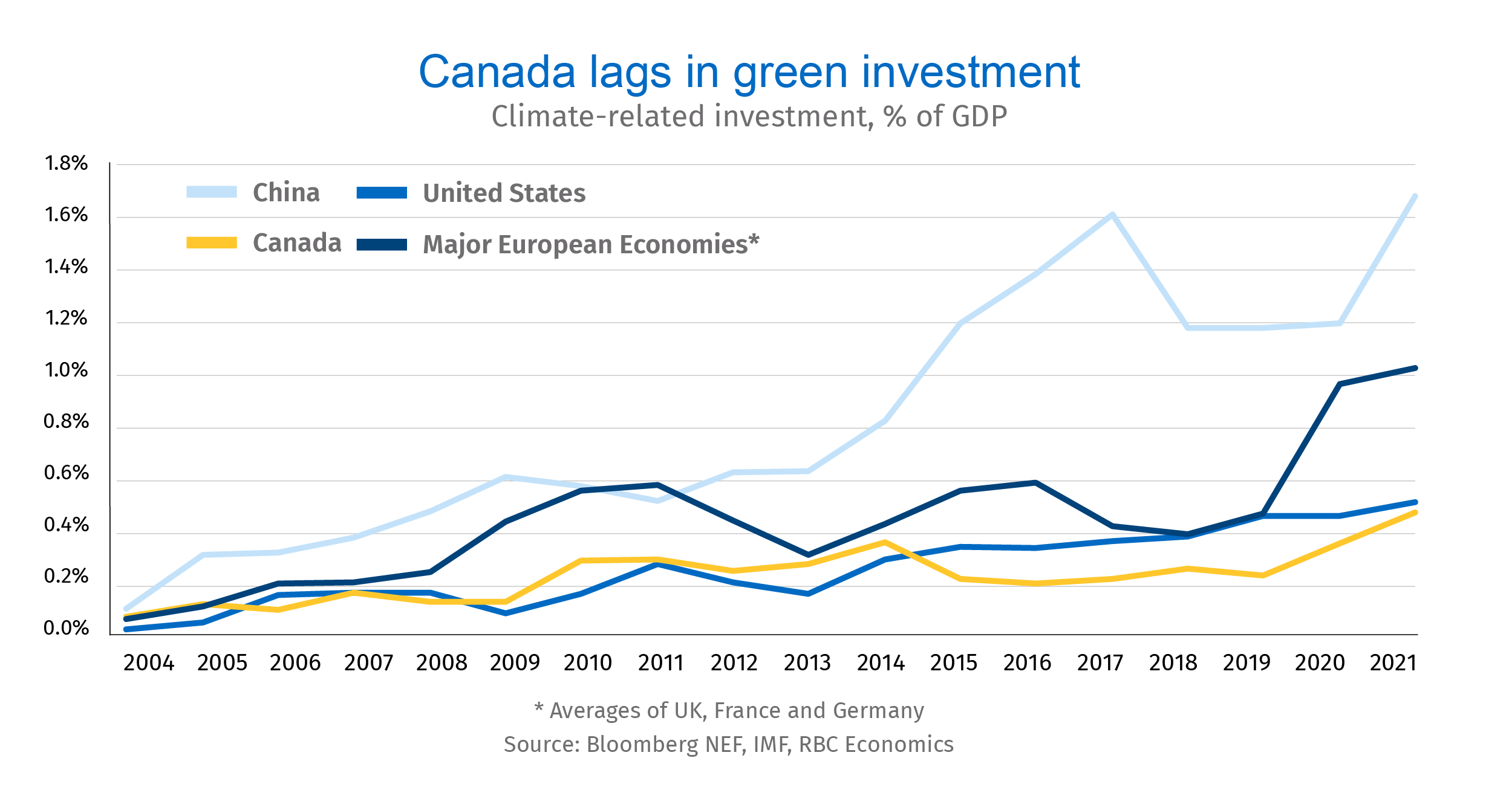 Without change, Canada could be left behind

Canada will need to adjust its policies, or risk falling even further behind major economies. After a decade of investment, we’re still not spending enough on clean electricity, which needs $200 billion in investment by 2035 to meet current green grid goals, and more thereafter to accommodate rapid growth in electricity demand.

That said, we’re much closer to spending enough on green electricity than in any other sector: investment there needs to merely double. Spending on electric vehicles (EVs) will need to grow from about $4 billion to nearly $22 billion annually while spending on heat pumps to decarbonize buildings will need to grow more than 8 times over current levels. And Canada’s heavy industries, including the oil and gas sector, need to break ground on carbon capture facilities. Though carbon capture has received little funding, it could be one of the single most powerful tools we have decarbonize the Canadian economy. 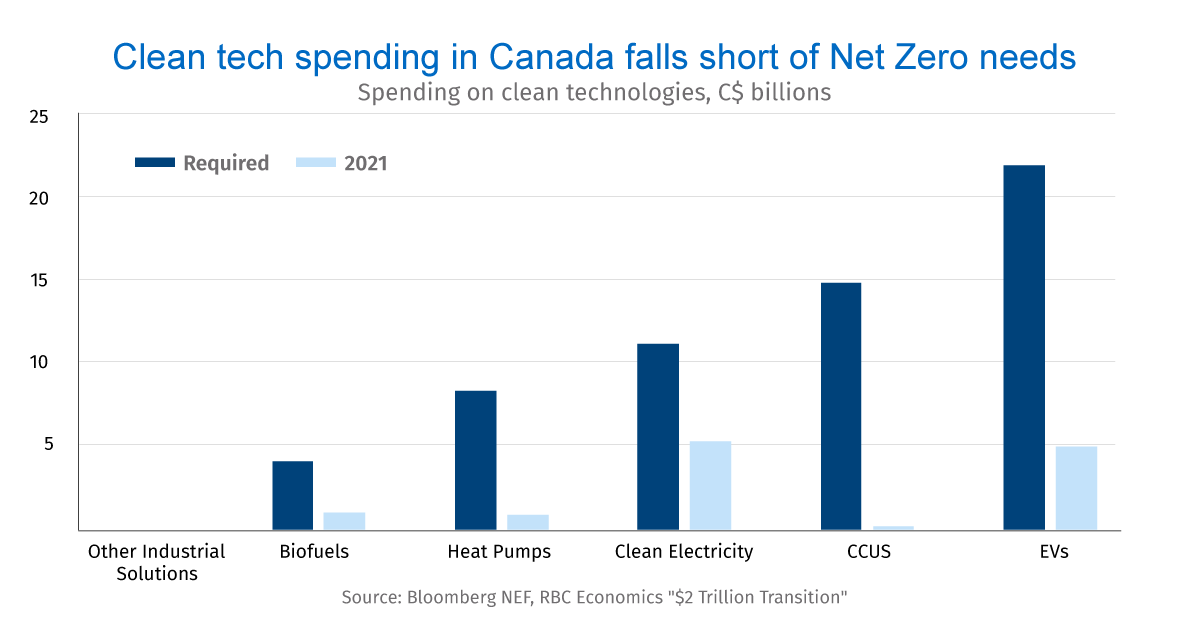 Canadian investment in the green economy is much broader than it used to be. Electric vehicles and their related infrastructure now account for some 40% of energy transition investment, up from nil as recently as 2013. Heat pumps also look poised to grow rapidly, with spending up 67% last year from 2020. And unlike renewable electricity, EV and heat pump adoption is still in its early days, and could accelerate significantly. Most technology adoption occurs slowly at first, and rises rapidly as more consumers adopt new tech. That means EV spending could be approaching a tipping point: it rose from a little over 5% on average in 2021 to 7.7% in Q1 2022, a welcome change.

If both EV and heat pump adoption rapidly expand, Canada could start closing the gap to what’s needed for the green economy. But policy has a role to play in making that happen faster. Looking to the U.S. for inspiration on how to accelerate EV and building decarbonization would be a good starting point. 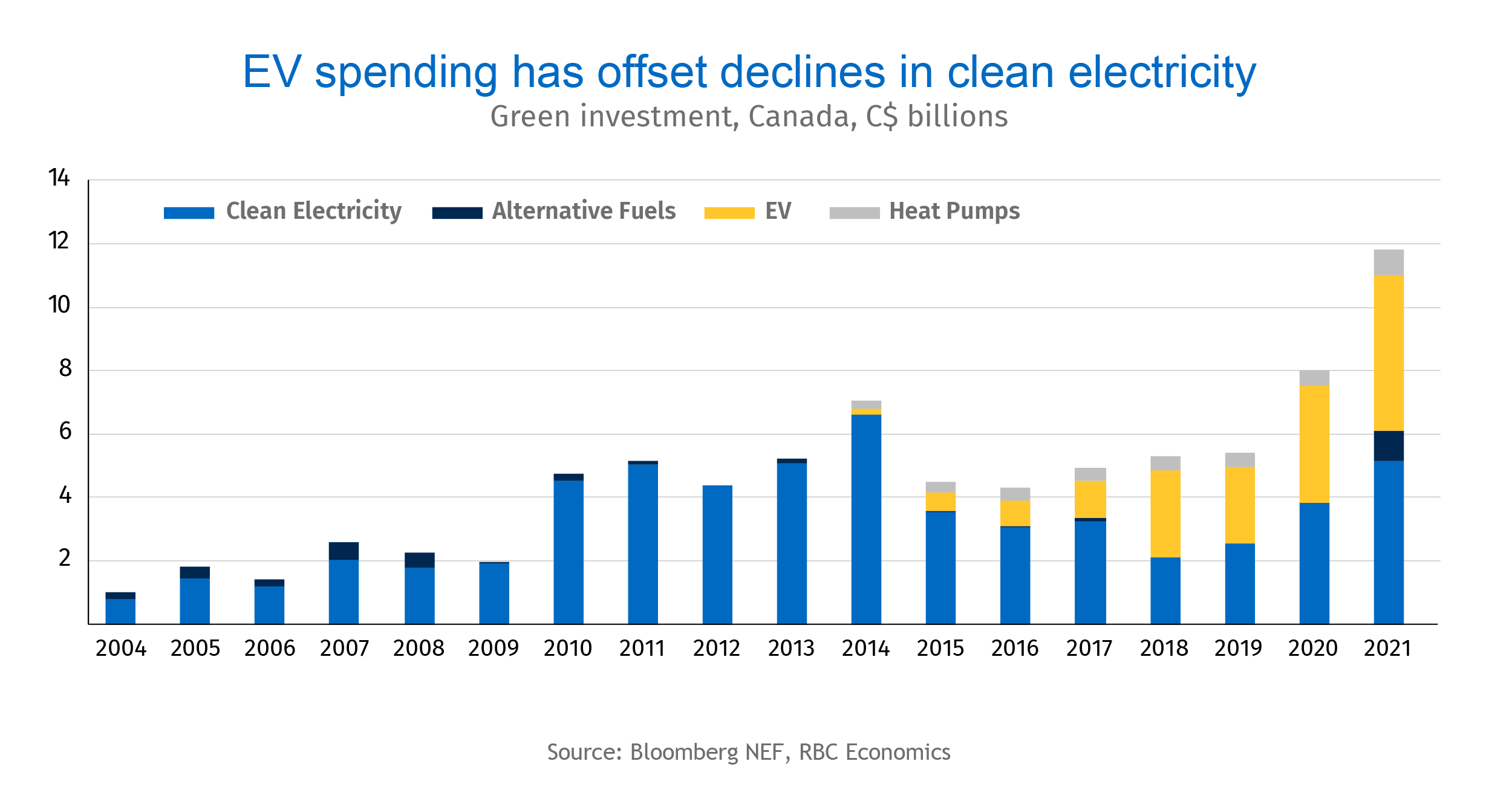